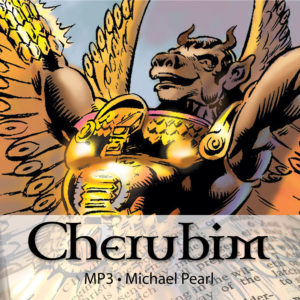 Announcer:  What was Eden? What was Lucifer doing there, and what's next?

Man 1:  Genesis chapters 1 and 2, where it talks about creation of Adam and Eve. God said he would place a garden "eastward in Eden." In other words, the name of the garden was not Eden. The garden was in the east of Eden. Eden was a location bigger than the garden. What was this Eden that had a garden in the east? By the way, today what do we call the place between the Tigris, Euphrates River, and the Mediterranean?

Man 1:  They call that the Middle East. [laughs] They call it the Middle East. When he says he's going to place a garden eastward in Eden, that's exactly where it's referred to today—in the Middle East. It is the Fertile Crescent. There in that place God placed a garden, in the middle of the place called Eden. Eden, I submit unto you, was probably the name of the earth at that time. It was Eden. He placed a garden in the east of Eden. Or, Eden was a larger part of that earth which would encompass all the land God promised to the children of Israel that they would eventually inherit. That could have been the Eden, but I think it was the whole earth.

Prior to his sin, Lucifer was in this Eden. But he said, "I will ascend into heaven, I will exalt my throne [he had a throne] above the stars of God: . . . I will be like the most High." "Yet thou shalt be brought down to hell, to the sides of the pit. They that see thee shall narrowly look upon thee" . . . saying, "how art thou cut down to the ground, which didst weaken the nations!" "The worm is spread under thee, and the worms cover thee." Jesus said hell is a place "where their worm dieth not, and the fire is not quenched." Not the worm, their worm.

I believe that the bodies will be burnt away in hell, and what will be left is the essence of the soul, which is a maggot, a worm, an embryo. That part will consciously suffer in the flames of hell forever and not be destroyed. Therefore, hell will be a place of maggots under and over in the fires of hell, and Lucifer will be one of them. "Their worm dieth not."

This Lucifer attempted to overthrow the throne of God, and he was cast down. When God had them make a replica of heaven, He had them make a mercy seat with two cherubim over the top of it.

Announcer:  We're really glad you listened today, and we hope that you were blessed. Remember, check our always changing online specials.