Filter by:
Resources / Audio / Kelsey, relationship / In Search of a Help Meet Part - 9 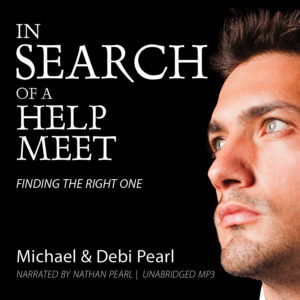 By Michael Pearl and Nathan Pearl

Announcer:  How do you court your future bride when you are unable to meet face to face? Here's the happy conclusion to Joshua's love story.

Joshua Steel:   As Kelsey and I embarked on what would become a lifelong journey together, our relationship was unlike anything I had envisioned. I was still in Thailand and she in Oklahoma. My acquaintance with her family had reached the ripe old age of three weeks, and neither of us had ever seen the other person. Our budding new friendship sounded more like a success story from an online dating site than a Christian courtship.

Yet none involved could deny that God was leading. Let me clarify at this point what exactly we had begun. Neither of us had agreed to marriage. How could we? We knew only the barest facts about each other and were proceeding primarily upon the sincere belief that this was God's direction. Our approach was practical. Separated by thousands of miles, we focused on exchanging information and seeking to confirm that this was, in fact, God's will. It was understood that both of us were free to back out at any time if we did not believe God was leading us to proceed.

Unlike most young people entering courtship, we could not meet face to face and so relied heavily on written correspondence. Looking back, both of us have observed that God used this apparent limitation as a means of maturing and strengthening our relationship. As we wrote, we discussed a variety of issues, including our views on children, finance, the family in general, church, ministry, education and employment. Woven into these fact exchanges were plenty of personal details in the simple, excited chatter of two young people who are rapidly falling in love.

But love was one word I refrained from using at the beginning. Too many have cheapened that word by applying it early and often to anything and anyone who happens to catch their fancy. I wanted Kelsey to know that when I first confessed my love to her it would be more than just words.

It wasn't long before I knew I needed to get stateside. Only a couple weeks after completing a transition back to Ukraine from Thailand, I flew home to Texas where Kelsey was waiting for me. Her parents had moved up to Calgary, Canada due to a work assignment from Danny's employer, but Kelsey stayed behind so we could meet and begin to spend time together in person.

As the days passed, my confidence in our relationship grew steadily. Soon I decided that it was time to tell Kelsey, in no uncertain terms, that I loved her. Trained as I was to treat such steps with extreme caution, I decided to check with Danny first. I sent off an email and soon received his reply. He gave his permission excitedly and even expressed some surprise that I had not already told Kelsey of my love. Armed with this approval, I purchased a dozen red roses and placed them in the parlor of my grandmother's house, where Kelsey had been staying. That afternoon Kelsey and I entered the parlor together, where she immediately saw the flowers. Her face beamed as she noticed the card protruding from the side. Inscribed on it in large letters were the words "I love you, Princess Kelsey."

A few days later I asked Kelsey to marry me, and she joyfully agreed. Perhaps no two people on earth were happier that day than we were. After long months of waiting, seeking, praying and trusting God, we knew for certain that each of us had found our life partner in the other. The days and weeks that followed were a delightful blend of travel, meeting family, wedding planning, and of course spending every possible moment with each other. On September 18, 2004, our young courtship officially ended as we crossed the threshold from singleness into marriage. Less than a month later we arrived in Ukraine and began building our new life together ever after.

At the time of this writing, Kelsey and I have been married for over eight years, and the Lord has blessed us with three precious children who are the joy of our lives. While married life has certainly presented its challenges, we have faced them together, not as competitors, but as friends. In fact, the phrase "you're my best friend" is one used often in our home. We count ourselves very blessed to have had parents and mentors who urged us to trust God in the area of marriage, and we can testify, along with many thousands of saints, that God is indeed faithful to direct the paths of those who wait on him.

Narrator:  Thank you for listening to this excerpt from In Search of A Help Meet. As always, remember to check out the current specials on our audio books and more.