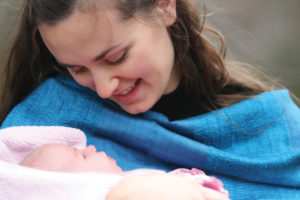 Debi Pearl: Papa and I are going to record, so y’all go ahead and shut the door.

[door creaks then closes, children talking and laughing in background]

Voiceover: Mike & Debi speak this week about gently teaching limits to infants. I can say from personal experience that some of these concepts are what gave my first fussy little one her happy smile instead of a screaming tantrum.

Mike: All right, the letter goes a little further Deb. Would you read the rest of it?

Debi: Ok, the next question is about training my little girl. Remember she is a 7 month old. The letter follows: I have made some mistakes already, like allowing her to play with my necklace and hair and now I’m having to go back and correct that. I wonder if you could be more specific about how this works. Is the objective for her to learn the word NO? I flick her hand and tell her NO but she tries over and over again. She cries after a few flicks and seems to be ‘getting it’ but what I gather from you it should only take 2 or 3 times. She continues to try for things after a training session. I flick her as hard as I can and maybe it needs to be a switch, or something to get her attention quicker. Also it seems almost everything is off limits for her. Do I continually tell her NO and flick her. I am feeding her and there may be some papers on the kitchen table and she reaches for them. Do I flick her hand and tell her NO? I certainly don’t want her playing with the papers, but how far do you need to go? Also, someone may be holding her and she reaches for their glasses. We have trained her that glasses are off limits but they might not know it or don’t care. So what do I do? Do I tell the people – Don’t let her get your glasses. Or do I tell her NO and flick her hand? It’s getting a little confusing because there are so many incidents that this applies to. Do they all get a swat? When she learns NO will the swats disappear? Am I making any sense? She’s not crawling yet so I don’t have the mobility factor yet. I agree with your techniques and I really want to implement them. Any advice would be appreciated.

Mike: One of the things I am impressed with there is she says it seems like almost everything is off limits for the child, and that is a fact of life. In my own house, most of what’s in my house is off limits to me. In other words, I don’t go into my daughters’ rooms and handle their toys, their objects, or their pictures or their treasures. I don’t get into their drawers. I don’t go into their closets. I don’t go into my boys’ rooms. I don’t go in there and touch and handle their vehicles. I don’t drive their vehicles without asking. When you go into a store, much of what is in a store is off limits. You can’t get into the jewelry case. You can’t get into where the watches are. It’s locked behind the glass. You can’t go into a grocery store and pick up anything that you see and stick it into your mouth. Most of life is full of limits. And when a child is born there are no limits. As I said the child knows pain. The child knows pleasure. The child has a want, a need, and then the need develops into a want. The want develops into a demand, and the demand develops into indulgence; and pretty soon the child is living a life of passion and indulgences and fulfillment. The job of a parent is to train that child to fit into society; to train that child to make adjustments NOW before it becomes embarrassing. If the child is trained at 7 months, then at 17 months you won’t have her throwing a fit in the grocery store because she expects to have everything that she sees sitting around her and be able to put it into her mouth. So YES, almost everything IS off limits to a child, and that’s a lesson you’ve got to communicate to your daughter.  And you have to communicate it NOW while it’s easy. Later on it will be much more difficult.

Now a child has a desire to touch, has a desire to taste, has a desire to feel and smell and handle and examine and explore. Of course you want to fulfill that drive in a child. You want to have a world in which that child is absolutely free to pick up one toy, throw it down, pick up another, throw it down, taste, touch, handle, scatter it, play with it, and do as she pleases. Each one of us has our own little world that’s ours, where we can govern it, we can control it. But then there’s that world that is not ours. It belongs to someone else and we have to exercise restraint when we have a desire to touch or handle it. If you go into a restaurant right now as an adult, there are lots of good things in there to eat but most everything in that restaurant is off limits to you. You don’t just walk up to the first table and the first good thing you see and pick it up and start eating it, but you go through certain social order, and that’s what your child has to become adjusted to. That there’s an order, there’s a procedure, that one has to exercise personal restraint. That you have to wait, you have to wait your turn, you have to wait for what’s yours. And you have to do it according to the custom and the culture in which you live.  So YES, it’s a good idea if you had a world for that child in which there were no natural limits, in which nothing was off limits. But then you would need to artificially create some off limits because when she gets in the REAL world, that’s what she’ll confront. So the way we train the child is we find some boundaries that we can enforce and we enforce those boundaries. For instance, not touching, not pulling on hair. Obviously if you avoid getting close enough for the child to pull your hair, in time she’ll grow up and learn not to pull hair. But NOW is a real good time to teach her the meaning of NO, to teach her self-control and self-restraint. Everyone is governed and the child has to learn to govern her own drives. So in terms of glasses, of course it’s very uncomfortable to have a child jerking your glasses off, and it makes you not want to pick them (the child) up. It makes you not want to hold them up close to you. So it’s good for the child to learn not to grab one’s glasses, not to put their finger in your mouth, or to put their finger in your eye, or not to pull on your hair. When your husband comes to the table and sits down to eat, he doesn’t mix his paperwork and his food up and create a mess. He had to learn that at some point, and now it’s a good time for your child to learn that. So don’t feel sorry for her because everything seems to be off limits. Rather you should be thankful that you can create some off limits now and gain that sense of self-control NOW before she gets to the point of where it becomes really embarrassing in a public situation.  Do you have any other thoughts on that Deb?

Debi:  I was just thinking, you said you did make some mistakes. You allowed your child to play with your hair and your necklaces, and now you have to go back. It is true that it takes a lot longer to re-train than it does to train. So right now you are having to train and un-train an already very WELL-trained child. That child has been trained that she can grab your hair, your necklace, somebody’s glasses, and she gets a little flick. Well, the flick was for a newborn. You have a 7 month old and that baby’s old enough to understand the word NO, and so you’re doing some back-walking. You are re-doing what you have already messed up. So it’s going take a little bit more reinforcement and maybe a little heavier reinforcement than a flick, now that the child is 7 months old.

Mike: Now I want to say that at 7 months old the child is not old enough to be able to reason that ‘if I do this, I’m going to get a spanking.’ The child is not old enough to be punished, obviously, at that age. So we use a thump or a little switch on the back of the hand, one stroke or two strokes, something like that, not to afflict suffering or pain on the child, but just to draw their attention to our word. And of course you only have to do that when they’re being rebellious or stubborn and refuse to listen to the NO. Refuse to respond. But don’t depend on that little swat or that little switching as all there is to training. It’s not. That’s a small part of it. Consistency is the keyword. Extreme consistency. Being very alert. Being diligent. Parenting is a full time job, and it requires vigilance. It requires studying the child’s eyes. Not just waiting until it becomes a frustrating, overt, outward failure to comply. But watching the eyebrows and the eyes, the slump of the shoulders, and anticipating what that child is thinking and feeling. And making sure that we are always in control and that we are training the child to be self-controlled and self-disciplined.

Voiceover: Thanks for listening!  I hope it blesses your day. Don’t forget to check out Cane Creek Corner for this week’s specials.