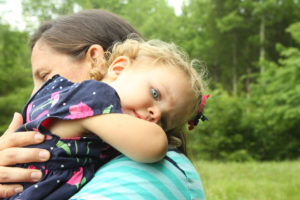 Debi Pearl: Papa and I are going to record. So y'all go ahead and shut the door.

Child 2: Alright. Let's go ahead and get the pump.

Voiceover: Welcome to Vintage Answers. This week we have some practical advice on getting our kids to bed. Here are the Pearls.

Michael Pearl: We're sitting here in front of the microphone and we have a lap full of mail. Deb is going to be reading letters that we received from you and then we're going to be discussing those letters, trying to give you some answers. Deb has our first letter here.

Then they cry out for us, "I heard a noise," "I can't see my sister," until we tell them all is well and to go to sleep. Sometimes we spank them again. Sometimes we spank them four or five times. We give them four or five swats with a stick or a spoon. I am willing to take a week off or even two weeks to retrain them. We homeschool and I would give anything to save our four babies.

Michael: Deb, maybe you can go ahead and address this thing of getting the kids to sleep.
Debi: OK. I know that mothers that are relaxed can be creative about bedtime. Mothers that are under a stress and strain can't be creative. We get lots of letters. We get some of the cutest letters you could ever read. A lot of mothers have written us saying that bedtime was always a stressful occasion for both the children and themselves because the children didn't want to go to bed. They seemed to be afraid. And the parents were tired and the parents just wanted them to go to bed and leave them alone.

But the creative mothers thought, "What can I do?" So many of them have written me saying that they turned the tape recorder on and let the children listen to Volume One and Volume Two of "No Greater Joy." There's just one story right after the other. They're entertaining stories and the children lay in there just listening to the stories. Even the two‑year‑olds will listen to the story and listen to a voice that they become familiar with, over and over, reading these stories.

And then, right in the middle of the Volume One or Volume Two, Mike gets into this theological discussion about why it works. Those youngsters get bored and fall asleep. So many mothers write in and tell us about it. It's real funny.

Some mothers said they tried Bible story time with them during that time and let them listen to tapes for Bible stories. But they were too interested and would stay awake and listen to the whole thing. For the younger ones, I imagine that would work. That is a creative, positive, joyful, happy something that children enjoy listening to.
Some of the parents put on gentle playing music, gospel music where it's just a very soft sound coming in. The children learn to enjoy that soft sound.

The main thing is these situations don't have to be stressful. It's what you make of them. If it becomes a discipline issue and becomes a point of contention between you and your children, it's because you have created that, because it can go the other way. Just be creative, joyful. Look forward to it as a time of rest and peace, instead of strife and anger.

For a child to risk being spanked or being sternly rebuked, being rejected, there has to be something in it for him. In other words, he's hoping to achieve something. And to take a risk, a risk that may involve suffering and pain or loss, physical or emotional, that child has to be seeking some great reward.

What is it he wants? Well, he wants mama's and daddy's attention. He wants your eyes fixed on him. He wants to hear your voice. What the child wants is the stimulation that occurs when you're awake. The provocation from site and sound and touch and feeling, the excitement of being part of something, of being involved.

So first of all, I would make sure I satisfy that. Make sure that the hour or two before they go to bed, you're reading to them, you're talking to them, you're giving them attention, they're enjoying your fellowship and they're being thoroughly saturated with all those things that a child wants. All that company, all that stimulation, all that excitement.

And then make up your mind, mother, it's your fault. You have been inconsistent, and the children seek opportunities for that loophole where in they gain their indulgence. So you've got to decide what they want and deprive them of it. When it finally comes time to put them to bed, make up your mind that once you put them down, if they get up, if they whine, if they make demands, you won't go in and reassure them.

Don't go in and tell them, don't go in and assure them all is well. Because that's what they want. They want that little bit of assurance. They want that little bit of contact. What you do is once you've put them down, if they get up, walk in with a switch. Don't say a word, no eye contact. You don't need to spank them excessively, just one whack across the leg will be sufficient, and walk out.

What you're looking for here is not enough pain to scare them into staying asleep, but you're seeking to take away that reward of a positive contact. So just be consistent. Stand right outside the door if you have to stand there an hour. Every time you hear a peep, every time they get up, without answering them, without assuring them, without in any way giving them what they want, walk in, give them one spat and step back outside.

Once you're consistent, if for three nights you're consistent and you never reward that in any way. See, if you get in a contest where you're nagging and complaining and you're reasoning with them, then you're rewarding them. Because you're creating a stimulation that brings excitement, which is satisfying.

You know, adults will get into arguments just because it's stimulating. Just because it's exciting. And your child delights in getting into that emotional confrontation, because that's much more exciting than sleeping.

So don't allow yourself to get into a discussion with them. Just make sure that what you have demanded, that they stay in the room, that they be quiet, that they go to sleep. You can't force them to sleep, but you can force them to lay there and not get up, and not make any demands.

So you be consistent. If you're consistent, a lot of those problems will go away.

Voiceover: Well, that wraps up this week's Archives. We hope you found it as encouraging as we did. Don't forget to check out the specials at Cane Creek Corner.