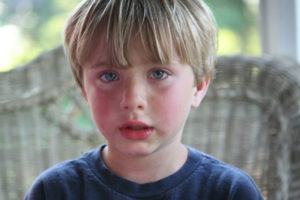 Debi Pearl:  Papa and I are going to record, so ya'll go ahead and shut the door. [door closes]

Announcer:  Welcome back to Vintage Answers with No Greater Joy. Let's finish up our letter with a discussion of happy, respectful obedience.

Michael Pearl:  Looking through your letter here, it's obvious to me that your son really doesn't respect you. You say here, several times, you've said that when I suggest, and he says no. He'd rather go read or watch a video. I always seem to be the meanie, giving him work. He avoids me, so he won't have the work to do. I struggle through with getting projects for me. And then you say, several more situations here where you mention, "he's not hearing me, he tends not to hear me, when I call." And you say, "He's not doing the job he's given, he's playing, he's grumbling, he's uncanny, he's dawdling. The job takes forever, he doesn't want to do it."
Now, you suggest something. What you need to do is determine what level of obedience you expect in your child, and demand that. Don't ask him. Don't listen to the grumbling, don't discuss it with him. If it comes to a matter of taking the garbage out, you tell him to take it out, and there's no discussion.

Now, the only reason a child grumbles and complains and is tardy is because it sometimes works. In other words, if that hadn't been effective in the past, then he wouldn't have that response. Sometimes he's able to get out of work, and so that's the reason he resorts to these measures is because you've been soft, you've been lenient.

You haven't demanded complete and thorough obedience in all cases, and so he really doesn't respect you. You've got to earn that respect by being firm and tough as a ruler there in the home. Now, again, you say, "He tends not to be hearing when we call him to do a job."

Now, why does he pretend not to hear? Because he doesn't want to do the job. And then you ask the question, about depriving him of the undesirable. You quote me and you say, "Your book says to make his undesirable behavior undesirable." And then you said you rub vinegar across his mouth when he was a smart mouth. That's not what I meant.

The issue was carrying the garbage out. That was the undesirable behavior, his failure to do it. Why did he not want to do it? Because it was painful, it was work. It disturbed his continuity of whatever else he was doing.

Now, if you make him carry it out, and then give him another job. So, OK, now you go clean the garage out, because you didn't carry the garbage out. He complains. So, OK, after you get through cleaning the garage out, then you can cut the grass. He says not my turn. Well, it is now because you just smart mouthed me. Well, you give me too much work. Oh, OK, you can trim the hedges also.

And just keep adding the work, and if he has to work solid for a week without schooling, without rest, without play time, just explain to him, look, when I tell you to do something, you do it, or you get more work to do. I guarantee when he is firmly convinced that you are always going to compound his work when he seeks to get out of work, he will begin to do his work thoroughly.

He'll do it completely, and he'll not complain about it, because he knows it's not to his advantage to complain. So, you haven't earned that kind of respect, because you haven't been tough. You've been mealy‑mouthed with him. I can tell that by reading your letter. So, it's time that you got firm and stood your ground, and made some demands. You got any other comments on that, Deb?

Debi:  Yeah. I would buy him a watch. A good watch. I would teach him how to make that watch buzz at a certain time, so he had a little alarm, and then I would tell him set your alarm for 3:00, because you need to get back here to do your work. If he yelled mom, I'd say, "Hey, never mind, you can stay here and do this other work, that I had planned on doing myself." After two or three days like that, he will set his watch. And then you can have a list that he knows that he does every day. If he has a list, he will have a tendency to know it's his job. It's not something you lay on him. It's his requirements.

Because what he'll do, he'll get to where he does it fast and sloppy so he can get free. Then you'll have to deal with that. Any job that's done sloppy, then it has to be done over again. Plus, he has to do extra jobs. He'll know what the extra job is ahead of time. It's written down.

I know with my daughters that are at home, they like to have a semblance of a schedule. I like to know that if they work a certain amount of school books during the day...If they do extra ones then they will be through early in the year. They like that schedule. They like to see it covering ground.

They both looked at each other and said, "We'll be right back." They ran into the bedroom and spent about 15 more minutes. They came back out and said, "OK. Now it's clean."

By this time, she'd finished washing the dishes and was cleaning off the counters. She turned to them and she said, "OK. You want me to come and check the bedroom because if the bedrooms not clean, the offer still holds. You will mop this floor if the bedroom is not clean and does not pass my inspection."

They looked at each other and grinned and said, "Just one more time." They ran to the bedroom and they spent about five more minutes. They came back and said, "Yes. It is totally clean."

She went into the bedroom and it was totally clean. She said she was real impressed that two small children could do such a spotless job. Not only on the bedroom but dresser tops and the closet and the bathroom and the whole area in there and do it cheerfully and energetically and work together so smoothly.

She's just a 15 year old girl babysitting and yet she had enough firmness and resolve without being angry, without taking personal offense. They're just children that she was responding to. "Are you sure you're satisfied with this job. Because if you're not satisfied, you're going to be mopping the floor."

They looked at that big floor and that big mop and they knew that if the job of the floor wasn't mopped well, they would be vacuuming the whole house. There's ways to do things.

Michael:  She's babysat them before. They knew that when she speaks, that's final. She never backs up. She never discusses it. She never argues with them. She never gets angry. She smiles the whole time. But they knew that for the four or five hours that Momma and Daddy were gone, that they would do one job after the other until the parents got home if they didn't do the job correctly. It was just a matter of survival. They were seeking the easiest path. The easiest path was to do a good job without complaining. That's such a simple principle and so easy to apply. It just takes a parent who has a vision to say, "OK. I'm going to make a demand. I'm going to stick with it. There will not be any backing up. No discussion. No reprieve."

Once you establish yourself as the kind of person that always tells the truth when you make a threat, always stands by it and you do coolly, without any anger, your children will just start obeying. They will do it all the time. It is absolutely amazing the response you'll get when you become firm.

Announcer:  Thanks for listening. I hope it was a blessing. Don't forget to check out Cane Creek Corner for this week's specials.