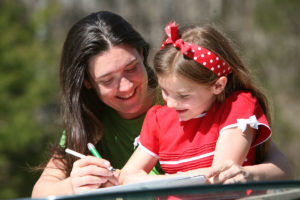 Debi Pearl:  Papa and I are going to record, so y'all go ahead and shut the door. [door closes]

Child:  Here, I'll give you some background. I was just about to ask...

Announcer:  This week on Vintage Answers, listen as Mike and Debi discuss encouragement to learn and how to handle time with friends.

Michael Pearl:  You asked about a project. You said, "What about them starting a project and then not finishing it, should you force them to?" Well, now, I can't answer that for certain. In other words, I really don't know your child or your situation and what the project was. There may be times that you will need to force a child to finish a project that they start. But if it's a project that's really rather indifferent to their education, in other words it's not something that's critical, it's something that they chose to start with, something that they get into and find out it's just dull, it would be better for you to heighten the excitement in some way.

In other words, take them to the library and find more information. Take them someplace where if they're working on a study of the planets and creating a solar system...Take them someplace, to a museum where they can see some things, get some more ideas and make the project more exciting.

But I would say don't push where there's boredom, where there's lack of interest, don't just keep pushing in that direction because all you're doing is making future study and future projects less likely to succeed. So find a way to stimulate them and excite them.

Debi:  Yes. I don't know if you're familiar with the library but if I had a reader, an eight‑year‑old boy that enjoyed reading, I would direct him to books that would teach him how to do things. I'd get rid of all the silly little books not by command but by just helping him pick out and discover that the library has books on ants. He could have it right there in his house. He could get him a jar and even learn how to do that at the library.

Michael:  They would be out in the garage though. I don't think I'd want ants in my house.
Debi:  He could put them in a jar. Or he could do a study on bees. You could go get a bunch of stuff together and get a book on kites and let him build a kite and decorate it anyway he wants to. Then let him have a class where he can bring a bunch of boys over and teach them how to build kites. So, in the process of learning how to do research, he's also learning how to communicate his skills. There's just so many different things that he can learn but the best way to do that is to make books available. Like put one in the bathroom that's going to teach him how to make a go‑cart.

When I was a little girl I made a go‑cart. It didn't have a motor or anything but we put it on top of a hill and rolled it down the hill and it was so exciting. It took days and days of hard work but one of the reasons the go‑cart was so fun was because there was competition with other children. And so, he's going to want that competition.

Also, I noticed where you said, "How can I teach him not to lower his standard by being treated unkindly just to play?" Boys have a natural instinct of one being the big dog and one being the small dog. Obviously, the child that you term as unkind is forcing his will over on your son and your son likes to play with him.

It might be good for him to get a little rough treatment. You need to consider that if you try to protect your son's feelings, try to watch out for his rights that you're going to create a little baby and he doesn't want to be a baby.

Michael:  I find that when you have two boys together, an older boy and a younger boy normally the older boy's going to lead and set the tone. So, if your boy's starved for friendship in the area you live in, pick a younger child for your child to play with, a child that is more of a follower. That's really an aid also to your child. It helps him become a leader and helps him to direct. He'll be able to manage the situation more than if he's playing with older children.

Announcer:  Next week, we'll conclude our letter with a discussion about grumbling and respect. As always, visit Cane Creek Corner to check out this week's specials.