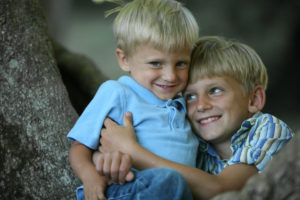 Debi Pearl:  Papa and I are going to record, so y'all go ahead and shut the door.

Announcer:  This week from the archives, The Pearls address a question about playtime. How much is too much, and what should it look like? Here's what they had to say.

Michael Pearl:  OK Deb, you read this letter to us now.

Debi:  OK, this is a long letter. Dear Pearls, I have some questions regarding our article the Reform School of Alexandria. You gave us a guideline of what a six to 10 year old should do. Five hours of recess, yikes. I have an eight year old son that when he's given that much playtime always gripes when he's called in to start work. As a matter fact, he seems to be complaining in general more and more. He doesn't watch television, and only a few selected videos, and that's not very often. Maybe one or two a week.

His friends are limited to two or three boys, one grumbler, the other boy appears nice. How do I give him that much playtime without it being an all day riding his bicycle with the grumbler friend or the other boy?

Also, how does one separate himself from boys that are continually unacceptable without offending? My son longs for friends, he doesn't have too many since we moved here just last May. I find he is willing to play with unkind people just so he can play. How can I teach him not to lower his standard of being treated unkindly just to play?

I also just listened to your tape "Best Homeschooling Idea." It was wonderful, a big encouragement. I would love more, specifically for children six to 11 years of age. I found a lot of good information for the younger ages and for the teenagers, but not for the age from six to 11.

Can you give us assistance with ideas on what to do with a city boy, who's really a country boy at heart? What can he do all day, activity wise? I come to a blank. He's always four steps ahead and so quick to give up.

I have three other younger children and I'm pretty busy, but I do have nap times I could work one on one with my eight year old. He just seems like whatever I suggest, he says no to. He'd rather go read or watch a video if his friends aren't available. I always seem to be the meany, giving him work. It's at times where he avoids me, just so he won't get any work to do.

Since last summer, we've let go of our traditional sit at the desk for hours type schooling. I've struggled through with getting projects for him without making him to do them. I make him follow through with a project he's chosen, or can I let him stop midway due to the lack of further interest?

He's a great reader, reads in the bathroom, reads every free moment. So reading isn't the problem. It's the thoroughness, lack of it, and a desire that is missing.

I know you're very busy people, and I appreciate any and all help. We've enjoyed listening to the Gami Akij tape. Our four year old just loves it.

Oh yes, one last question. Your book says to make his undesirable behavior undesirable with undesirable consequences so he'll never want to do it again, whatever it is at the time. But I have trouble knowing what kind of consequences. Do you have anything for a smart mouth? We've wiped his tongue off with vinegar in the past.

He leaves messes continually. The same messes, the same spot. Conveniently not hearing when we call him, not doing a job given, playing or grumbling or unkind looks. Dawdling, and his jobs take forever because he doesn't want to do it. All these things are problems.

My husband had our son start doing push ups, which works good. But sometimes, without consequences our son just gets madder. He's done as many as up to 50 push ups, but the average is 20.

Do you have some women retreats or something like that during the year? I pray for your ministry, thank God for all he's done through you in Christ.

Mike:  All right. By the way, a woman's retreat is sending the kids somewhere Sunday afternoon and spending the time with your husband. All right. I've got this newsletter out here that she spoke of, the Reform School of Alexandria, and the place where she referred to. First let me read the paragraph that goes before that.

It says, "What horrors to see a small child quivering under the condemnation of his mother, because he can't keep his mind on a dead book lying in front of him?" Sounds a whole lot like what we saw here in the letter.

Long hours of boredom and pretended study stunts the intellectual growth of young children. Yes, we want our children to be educationally equipped to enter into any field of discipline they may choose. But mindset is more important than mind content.

It's far more important for a child to grow into personal confidence, creativity, and vision, than to rush into academic excellence. The reality is that most homeschooling parents are following the current pop philosophy, sacrificing the humanity of their children for the promise of academic security.

Following a natural course as I have described, the 17 to 18 year old won't need your balancing. He will be a man in every sense of the word. The 17 year old girl will be a lady of poise and confidence, ready to meet whatever challenges await her.

So, she refers to this five hours of recess, and says I have an eight year old son that's given that much playtime always gripes when he's called in to start work. I would suggest that this child would also gripe if you gave him eight hours of study and gave him one hour of recess, he would gripe just as much.

It's pretty natural for kids to gripe when you take them away from play and put them to work. I don't believe I ever enjoyed a day of school in my life when I was young. So you're not going to expect the kids just to come running in and say OK mom, I'm excited, I'm tired of playing, how about some school? That usually doesn't happen. Occasionally, but it usually doesn't happen.

You said you have an eight year old that when he was given that much playtime always gripes when he's called in to start work. Get dinner table, feed the dogs, etc. As a matter of fact, he seems to be complaining in general, you said in general, more and more.

So what you need to observe here is that his complaining is not just related to his schooling, but it's a general state of mind. What's happening is he's getting a little older. He's a little male and he's seeking dominance, and he does not want to do those things that are unpleasant, that are difficult, that are trying, or that demand any self discipline.

You said he doesn't watch TV, only selects videos, and not that often, but one or two per week. But then you said later that all he wants to do is to watch videos or read. If you find that the watching of videos, even one or two a week, is consuming so much of his interest that he seeks that as an outlet when other things are demanding, I'd just cut them all out for a while. No videos at all, and give him books to read. Good books that will be useful to him.

And then you said here that when he's playing with other boys, and it says the other boys appear nice, how do I give him that much playtime, with it being all day riding his bike? Now, when I talked about several hours of playtime for children, that does not mean that you turn them loose in a city to play with whoever they might meet on the block.

So, playtime can be very constructive time. It can be a time of creativity, and I wouldn't allow my children to spend five hours everyday hanging out with neighborhood children. If you live in a city environment where you don't have much for them to do, where there's not any woods or creeks or hills, or places where they could actually dig a hole and it be acceptable, then you're going to have to artificially create an environment that those children can play in, and it be a creative environment.

Now, you say what could I do? I've had different parents tell me about things they've done. For instance, one mother who was a single mother, boys didn't have any father, simply got hold of lawnmower engines. The way she did that was she went down the street and knocked on her neighbor's door and she said, "Have you got any old lawnmowers you're going to throw away?"

And so she stocked her garage, her carport, with old lawnmowers. And she got a $39 set of tools, and told her boys if they would work on those lawnmowers and fix them, then they would paint them up and sell them and they could keep the money.

Well, that kind of motivation really excites boys. They didn't know what to do, so she found someone that worked on lawnmower engines and got them to teach the boys a little bit. And it took them a while before they could ever get one running.

But they worked at it, parts scattered everywhere. And finally the day came when they were able to put an engine back together, and it run. And put wheels on the lawnmower and get the cables all hooked up, put a fresh coat of paint on it, sit it out on the front of the house and sell if for $35.

With that the boys were so excited, they became entrepreneurs. So that's one way. Another way is you could have a carpenter dump a whole truckload of sawed off pieces of wood in your yard. Haul them around back, stack them in a corner, get a handsaw, nails, hammer, drill, and tell your boys...give them some plans. Go to the library with them, help them look through the books. Find some plans for making stools or chairs or baby beds or dollhouses or whatever, and let them make them.

Then go to a flea market with them to sell them, or some yard sale, show them to their friends. Get the boys involved in something, and if they don't want to do it, you can't make them. But you've got to just seek until you find that thing that interests them.

So you have to look, search around and give them several opportunities. If they work on something a little while and get totally bored with it, don't keep pushing. Don't push them into further boredom.