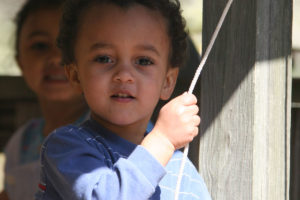 Debi Pearl:  Papa and I are going to record so y’all go ahead and shut the door.

Announcer:  Welcome to Vintage Answers from No Greater Joy. This week, Mike gives some no nonsense advice about what a proper spanking should and should not look like.

Michael Pearl:  All right, Deb, go ahead and read that next paragraph.

Debi:  Our son, also has started not standing still when we spank him. He tries to walk away, turn around, put his hands over his bottom. We give him more spankings when he does these things. But it seems to have to no effect. When we forcibly bring him over to spank him, he drops to the floor and he won't stand up.

Michael:  OK. I see a pattern here. You said in the paragraph above that you take him from the room to spank him, and when he goes back out to where he was playing, he rushes right back over to her and grabs the toy. So back we go for more spanking. Sometimes the scenario continues for 30 minutes, and then you said here again, he tries to walk away. We give him more spankings when he does these things. But it seems to have no effect.

What you have here is what I pointed out earlier, when you remove him from the scene, when you take him away from where it's happening and take him in the bedroom, he is not making an association between the spanking and the event. When you bring him back out into the living room, where he's playing with the toys, he immediately jumps right back into the same attitude.

Why? Because he knows he is not going to be spanked there. You are going to have to remove him back to the bedroom. So, if you stood over him with a little switch, where he is throwing his little spell, and you demanded submission — in other words, you demand that he act right and respond right — you spank him on the hand and say, "Take your hand off." If that’s the situation. Or you spank him on the hand and you say, "Stop crying."

Or you spank him on the hand and you say, "Stand still." You maybe swat him on the leg or the calf, or the ankle, whatever is exposed, with the little switch and say, "Stand still," "Sit down." Make him obey simple, very simple commands. You may not be able to rule his attitude completely at the moment but what you can do is show him that you are in authority.

You can say, "Sit down," and he will sit down. You can say, "Put your hands in your lap," and you can stand over him with a firm demand, not angry, not flying apart, but comfortable, relaxed, just firm. With the little switch, you can make him put his hands in his lap. You can say, "Now, be quiet. Stop crying and stop whining."

And when he stops crying and he stops whining, say, "Now, you can take your toys and line them up." So, you can bring absolute submission in the environment where the offense was committed. You cannot do that when you disassociate the spanking with the events.

Debi:  He's got two crisis situations happening at the same time. One crisis is his sister has messed up his cars. The other one is you are distracting him from doing what he thinks is important by causing another crisis. So, they are just totally unrelated, he just... Once he gets through with the crisis with you, he runs and takes care of the crisis with her. So you are not doing anything but causing him a little pain on the hand. If I were him, I'd drop to the floor, too!

Michael:  There's nothing unusual about this droppings to the floor and putting his hands back there and avoiding being spanked. My kids did that sometimes, too, especially when they were small. Shalom, probably the most obedient, the most balanced personality of all our children, was the worst about that, because she was a little more emotional, a little more nervous than the other kids, and she just lacked the ability to just firmly take control of her emotions. And so, she would just kind of come apart all of a sudden. You can't blame your child for that. I mean he is experiencing terror, and he's not, what would you say, a Navy Seal. He's not trained in self-discipline in that way, to take suffering and torture and not cry, and not whine.

What we had to do with couple of our kids was, when they dropped down the floor, we would just tell them to stand up, and when they wouldn't, slow down at a point like that. Don't be anxious and don't be in a hurry. Slow down and relax yourself, and that will help the child to relax. Be calm, take some time, give them a few moments to relax, that takes a couple of minutes, just sit there while they carry on, and wait until they calm down and relax.

If ultimately they wouldn't calm down and relax, you can lift them up and lay them across the bed, gently lay your leg or arm over their shoulders and arms to pin them down, and give them your spanking. But don't terrorize them. Don't be hasty of spirit yourself. Dont' be anxious, don't jerk them around by the arm or the leg.

What you do, do it calmly, do it slowly, do it with a controlled spirit. Do it in patience, and that in itself is going to help to calm the child and help the child to submit to this without it being a "street fight" conflict.
Yes, as we mentioned earlier, there's a whole lot in our book about tying strings, about your relationship to your children. It's better to think ahead and build a firm relationship of fellowship with your child, communion with your child. So your child learns to live by your soul, your child walks after your spirit, and your child sees your heart, sees your desire, and wants to remain in communion with you.

A child like that won't pout, won't throw fits, won't whine and cry out because they know that's not going to work, in the first place, and secondly, that's going to break fellowship. So your child is going to be more mature in their response toward someone whose fellowship they value, whose communion they appreciate. So, maintain that fellowship with your child. Tie those strings in the many little positive things you do together.

Announcer:  Well, that wraps up this week's archives. We hope that you found it as encouraging as we do. Don't forget to check out the specials at Cane Creek Corner.