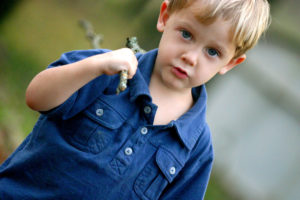 Mail Bag - You're NOT My Mama

Debi Pearl:  Papa and I are going to record so y'all go ahead and shut the door.

Girl:  Hey Bonnie, could you tie my shoe?

Announcer:  We've all heard, "You're not my Mama," from a child that doesn't want to obey someone else. This week from Vintage Answers, Mike and Debi offer some common sense on this subject.

Debi:  OK. Here's a letter from the Craigs. "Dear Mike and Debi Pearl, we have four children, ages seven, four, two, and one. Our oldest son, Stephen, has, from day one, been challenging in the area of respecting those in authority. He challenges, most of time, those who are in authority of them such as the babysitter, the pastor, ect. He has gotten so much better at home and with others, although we still have to deal with it. He will say things like, 'You are not my mom,' or he just won't obey. I know your book "To Train Up A Child" says if they say that then they're not respecting their parents at home, but he really is taught to obey and he does obey us at home and he is more respectful at home than he is with other people.

Although he's getting better, it still happens and it worries us. We certainly do not want a teenager with this attitude."

Michael Pearl:  Deb, do you have some ideas on that?

Debi:  We go back to that thing with respecting authority outside the home. I've noticed that parents who have children who have this problem, they tend to criticize other people at home. They come home and they say, "I really don't think that the pastor should be doing this or that," or, "Did you notice how Ms. So‑and‑so said this and that?" They question how authority dealing with something. They question on whether they did the right thing and the children hear that, especially the oldest son in the family. He might be five or six years old. He grows up hearing the father constantly give question about whether those in authority over him have done right and whether something is not exactly up to par or just putting a cloud over the authority in the father's life. By doing that, the son learns to disrespect authority in his life.

He might obey at home because he's been brought under pressure to obey at home, but he will have problems with other people.

Michael:  You mentioned that he obeyed at home, although he didn't obey well under other people. It seems to me you're rationalizing. You're taking comfort, hoping that that really expresses obedience by being obedient in one area. When a child selects the authority he is to obey and rejects other authority, then he is not under any authority but his own. A child should see the authority in other parents and school teachers, Sunday school teachers, older adults, that discipline him. When I was a child, if I disobeyed or spoke disrespectfully, spoke in a way toward any adult like would be offensive to my father, then if my father found out about it he would spank me just as if I'd spoken to him that way.

In other words, he enforced authority in general, no matter where it came from. Because he had a respect for the word of other people then I had to have also. I think it's wise that if you find out that your son has said to some adult, "You're not my parent," then you should just go ahead and spank him for that.

You tell him at home he may not be your parent but when you're in that Sunday school class you're under his authority and if he tells you no, that's no. You should treat other authorities as final and that will communicate that message to your son.

Announcer:  Thanks for listening. I hope it was a blessing. Don't forget to check out Cane Creek Corner for this week's specials.