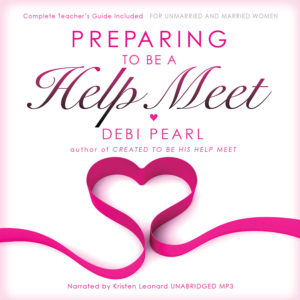 Preparing to Be a Help Meet - Part 11

Announcer:  Waiting for the right man can be incredibly difficult. When the Lord reveals His will, your time spent waiting will no longer seem to matter.

Kristen Victory:  Waiting for the right one.

"They that wait upon the Lord shall renew their strength. They shall mount up with wings as eagles. They shall run and not be weary. And they shall walk and faint not." Isaiah 40:31.

I, Leah, grew up in Texas. The oldest of five home‑educated children. I love to play golf, tennis, and chess. I graduated from the Culinary School of Fort Worth and Thomas Edison State College with a Bachelor's in Business Administration.

I worked as a reporter for a national political magazine and then at an adoption agency with young mothers to be, in the residential program.

I told my parents I was looking for three things in a future husband, a man of God, a man of character, and a man that commanded respect. If he sought the Lord, I could trust him when our views differed because I knew he was praying. If he had character, I'd never wonder where he was at night or what he was doing on the computer. If I respected him, honor and submission would be easier.

David was born in San Diego and moved to Texas when he was 13 years old. The second oldest of four children. He played baseball and graduated from Oral Roberts University with a degree in finance.

David was looking for a woman with Godly character that had a heart for the Lord with a strong foundation in the Word.

From David. A lot of the girls I'd met had no substance or character. I would ask them questions about the Bible and marriage roles. Their answers were light and shallow. Although many loved the Lord, they didn't know the Bible well and had little moral fiber. It seemed they had no strong secure relationship in the Lord.

The waiting period can be difficult if you do not put your trust in the Lord. It may be short. It may be long. Once you meet the one God has for you, all of that waiting will not matter at all. Stay patient. Seek the Lord with all your heart, soul, and mind.

How can we believe that God couldn't create the Universe and sent His own son to save us, yet, we question whether he can bring us the right person on His timing, not ours?

My advice is to love the Lord, your God, with all your heart, soul, and mind, to seek Him in everything. No matter what trials come, if you are seeking the Lord, he will direct your steps and lead you. Don't have a fairytale mentality of sitting at home, waiting for prince. Any time God did something in the Bible, it required action.

If you want to marry a Godly guy, get involved in ministry and places where there are Godly men. Be active in church. You must not try to compare your past failed relationship to what God may have for you in the future.

Even if you've experienced unsuccessful relationships, you shouldn't become cynical about future relationships. When you find the right one, there will be peace.

Cinderella picks up here. We both had well‑meaning friends that tried to set us up. For both of us, it usually took only one date for us to determine if this was marriage material or not. One thought always helped me weed out potential spouses.

David and I met at his work. He was giving a presentation. I was sitting on the front row. After the meeting, we talked briefly. We both thought the same thing. What are the chances they know the Lord?

I later called David with a work question. Suddenly, he was talking about God. I remember hanging up the phone and thinking, "I totally misjudged this guy."

We talked for a good three months over the phone. No flirting, just theology, ideals in life. I grew frustrated and complained to my parents, "He never says he likes me. What kind of girl does he think I am?" I don't continue a relationship with a guy if it's not going anywhere.

My praying momma soothed, "Honey, he is studying you right now to make an informed decision."

David says. Although Leah was beautiful and attractive, the biggest draw for me was finding out that we shared a common passion for the Lord. We both had a strong personal relationship with Him. She knew all the vacation Bible School songs I grew up with and the Bible stories.

She was grounded in the world. Most importantly, you could tell she had built character and faith from years of walking with God as a single woman. She had truly established a strong relationship with God.

Seek the Lord while making the biggest decision of your life.

During that time, another young man approached my dad about courting me. He was forward and flirty. Dad unveiled his hesitations and reservations, but said the ultimate choice was mine.

I am so thankful I was seeking the Lord during the season and knew His voice from years of Bible study and prayer. As soon as dad told me it was my decision, I felt a huge check in my spirit. This wasn't my husband.

I told the man, "No." The next week, David asked me out on our first date. Dinner and a comedy show. David still wasn't flirty. The next morning, I wondered if I had done the right thing. In my prayer journal, I wrote in all capital letters. "Leah, the most important thing to you is a man after God's heart. That is what you have always admired in David."

My relationship guideline was a few dates, then the suitor meets with dad. After two more dates, David didn't have to be asked. He called dad up. They met at Starbucks.

Dad was prepared with questions he had gathered for years. Dad even called some of David's references. The outcome, "Leah, you should be very honored that a man like David wants to pursue a relationship with you." Dad said.

After dad blessed our relationship, David blossomed into the romantic every girl loves. While we dated, I tried to think 10 years down our marriage, if I felt like leaving, what would keep me in? The thought kept coming back that God called David and me into this marriage.

I leaned on this reflection heavily as it was confirmed through parents, friends and prayer. It was hear my parents analyze David. I stood fast in the thought that if it was God's will, it would work itself out.

David and I, both, told each other that God was more important than the other. If God called us in or out of this relationship, blessed be the Lord.

Woman 2:  It was such a peace. We were merely discovering God's will.

Woman 1:  Thank you for listening to this excerpt from "Preparing to Be a Help Meet." As always, remember to check for specials on this and other audio books on our website.

One comment on “Preparing to Be a Help Meet - Part 11”