Filter by:
Resources / Audio / Preparing to Be a Help Meet - Part 2 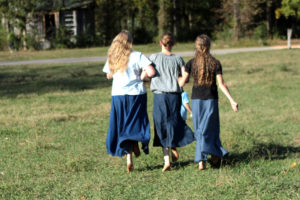 Preparing to Be a Help Meet - Part 2

Announcer:  Debi was Mike's helper long before he ever realized that she was a girl. They shared God's vision for winning the lost.

Debi Pearl:  That same summer, our regular pastor left our church for greener pastures. My daddy was at the pulpit committee, the group of men responsible for finding a pastor. The men called several different preachers to try out. Some of the preachers were not King James version, so they were out. Some did not like the rural area so they decided not to come.

A few were just too boring to tolerate. And so week after week, our church had different preachers come and go. It was a tedious, time‑consuming chore to find all of those preachers and then to make the arrangements for them to come each week, find the place for them to stay, et cetera. Finally I said to my dad, hey, that preacher guy that was at camp was pretty good. He's still in bible college, so maybe you could just have him fill in when you can't find someone else to preach.

Since the men of the church were at their wits' end, they listened to the mature counsel of a 16‑year‑old girl. Did you know that sometimes God uses the unexpected? Anyways, my dad called the college and asked Michael to come and preach at our church for the next Sunday. Over the next year the young preacher filled in as the speaker on Sunday mornings, or evenings, several times a month. Finally the men decided to ask him to come as our regular pastor.

So now I called my future husband Brother Pearl. We became great friends and he still treated me like I was a kid. A note from the visionary man. The way you meet your future spouse and the style of courtship used pales to the importance of the person's character. Character can be refined by scripture. All scripture is given by inspiration of God and is profitable for doctrine, for reproof, for correction, for instruction in righteousness. 2 Timothy 3:16.

I encourage you to search the scriptures to know whether the things said in this book are in accordance with the word of God. Opinions are just opinions, learned or otherwise. Only scripture is absolute. Only scripture carries the power of God to salvation and effectual works in those that believe. 1 Thessalonians 2:13.

At that time, our town hosted the largest inland naval training base in the USA, which also contained a huge hospital for soldiers coming back from the Vietnam War. Mike started a ministry for military where he needed a flunky, someone to carry out plans. We became running buddies. We worked side by side handing out tracks, sharing the gospel, setting up meetings, and cleaning up after the ministry was finished.

And I prayed, really prayed, that God would use him to minister to the lost. Michael usually had a girlfriend with him for all these events. Sometimes I had a boyfriend. It was truly strange. His girlfriend would sit between us so he would have to lean forward to talk to me about the meetings, or strategy, or whatever we had going. There, right between us, sat his date with nothing to contribute.

Sometimes we would pray together with some girl sitting there as if she were a non‑being. I was his helper. He needed me. I jumped into any project he had going, not because I was after him, but because I was interested in the things he was interested in. We shared God's vision for winning the lost. He never had a clue that I believed he would be my husband. He even laughingly told me of occasions when other girls approached him and told him that God wanted them to be his wife.

The times he told me about the other girls, I was glad that I kept my mouth shut. I have to say, the other girls seemed much better candidates for his wife than I was. When I heard that some young woman had told him she was to be his wife, it always shook my confidence. I would ask myself, why would God choose me instead of her? Every one of those girls sang, played the piano, and looked what I called fancified. They all talked like dignified ladies. Queenly.

That is the kind of girl he unconsciously always chose. Once, one of the young ladies came to me and asked me, since I was such close friend to Michael, if I would tell him that she was sure she was the one for him. I remember looking her in the eye and saying, you'll have to grow your hair out first. He would never marry a woman with short hair.

I didn't make up the short hair idea just to make her bug off. I knew he really was opinionated about long hair. Most young guys are. I finished high school, went to a local Bible College, until I grew bored of it, and then started working for one of my professors, as his secretary, in a large church. The year seemed to fly by.

I was at school or work everyday, then in the evenings, we had prayer meetings. Bible stories, evangelistic meetings, street meetings, or meetings to plan other evangelistic outreaches. Michael and I came to know each other in a wholesome way. There was never any deep sharing of innermost feelings. We never confided, but he did see me as mad as a hornet a couple of times. I saw him being pushy and demanding, plus I knew that he was the most prolific messer in history.

His office always looked like someone broke into it and sought to tear it apart. But I knew he was genuine. I saw his heart for winning lost souls and he saw my willingness to jump in and do the worst jobs for the gospel's sake, enjoying every minute of it. When I turned 20, I knew the time was drawing near. Still, Mike had never seemed to notice that I was female. After seven years it was beginning to irritate me, so I played a trick on him.

Announcer:  Thank you for listening to this excerpt from "Preparing to be a Help Meet." As always, remember to check for specials on this and other audio books on our website.