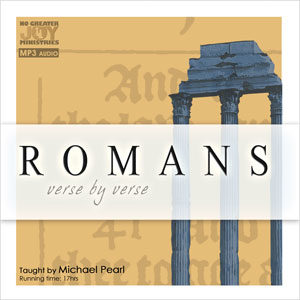 Bible Teaching Verse by Verse of Romans Chapter 7. To hear the teaching on the full book of Romans go to http://nogreaterjoy.org/audio/romans-audio/

Romans 7:1-7
1 Know ye not, brethren, (for I speak to them that know the law,) how that the law hath dominion over a man as long as he liveth?
2 For the woman which hath an husband is bound by the law to [her] husband so long as he liveth; but if the husband be dead, she is loosed from the law of [her] husband.
3 So then if, while [her] husband liveth, she be married to another man, she shall be called an adulteress: but if her husband be dead, she is free from that law; so that she is no adulteress, though she be married to another man.
4 Wherefore, my brethren, ye also are become dead to the law by the body of Christ; that ye should be married to another, [even] to him who is raised from the dead, that we should bring forth fruit unto God.
5 For when we were in the flesh, the motions of sins, which were by the law, did work in our members to bring forth fruit unto death.
6 But now we are delivered from the law, that being dead wherein we were held; that we should serve in newness of spirit, and not [in] the oldness of the letter.
7 What shall we say then? [Is] the law sin? God forbid. Nay, I had not known sin, but by the law: for I had not known lust, except the law had said, Thou shalt not covet.