Filter by:
Resources / Audio / Other / Mail Bag - Too Much Spanking 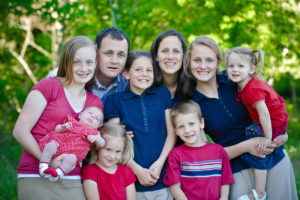 Mail Bag - Too Much Spanking

Debi Pearl:  Pop and I are going to record, so you all go ahead and shut the door.

Child 1:  Are they recording about naughty children in there?

Announcer:  Have you ever felt like you might be spanking too much? This week, in our Vintage Answers series, Mike and Debi offer some practical advice.

Debi Pearl:  OK, here's another letter. This one's kind of long. It says, "Dear Mr. and Mrs. Pearl, I have recently read your newsletter for June and July, of which I am a new subscriber. Contained in the letter was an article named, "It's The Book's Fault". I read the article with great interest. I truly relate to the mother who wrote to you. I, too, am frustrated. Unfortunately, I could have written parts of the letter to you. When I read your response, I cried like a little child. I cried for my flops and my failures, and I cried for the other woman who wrote to you. She must still be picking herself up off the floor. I read your book, "To Train Up A Child", which I found very educational and full of wisdom. The woman also read your book. She has similar problems as I do. I have four children, ages nine, seven, six, and four: three boys and a girl, in that order. They argue, fight over toys, get into things they shouldn't: they get into flour, and Daddy's tools, and pens and markers, and eggs and potatoes, and you name it, they get into it.

They still need to be spanked to go to sleep. They still throw an occasional fit. They have bad attitudes, and my seven year old is starting to lose control of his temper...a lot. My daughter screams, and pinches, and scratches her seven year old and six year old brothers. My seven and six year olds scream when they are going to get a whipping, or even they throw a fit. Yes, they get spanked for all these things: screaming or fit‑pitching. Sometimes, I wonder if it makes any difference, because they're not learning from all the spankings, they just keep doing all these things.

My nine year old dawdles a lot, has trouble focusing on what I ask him to do. He says he forgets. I wondered about spanking for forgetting, it's a daily habit. Forgive me for being critical of my children, but I'd rather have the bad news come first, so we can deal with it. I do love my family, I love my children dearly. I want to train them in the way they should go. And yes, I have my own vision of what I want my children to be like, and I don't want to blame your book.

I had these problems before I read it. Some days, obviously, are better than other days. Some days, I just sit and cry. I do have a different twist, in that my husband does not approve of spanking the children. He yells, and yells, and yells. Therefore, my spanking hours are limited. I'm even unsure of his salvation. I'm not a perfect Christian, but I'm not the same person I was nine years ago, when I first got saved.

I do not have a role model to follow, and I'm not an outgoing personality. I have gone to our pastor for help, but he feels the kids are just bored. If only you could help me train, educate, and direct the children, or maybe direct me. But I know that's not possible. I guess I'm looking for specific answers to specific problems. How do I stop my seven year old from losing his temper and throwing a fit? Or smart‑mouthing me? How do I stop a lot of these things? I know you can't answer all my questions, but I'll pray you can help me."

Michael:  Alright. That's a real...it almost seems impossible, when you hear a letter like that. We get quite a few letters like that. It seems just like the woman needs a thousand answers to a thousand problems, and to organize all the answers, to know what to do in each given situation, seems to be an impossibility. But let me say this: if I could take your children in my home, in three days, they'd all be obedient. In ten days, they'd all be happy, cheerful, joyful, and there'd be no problem at all. The problem here is really not one with the children. You know, it's not like you have bad kids; it's not like the kids are such a terror that they're in an impossible situation. The problem, obviously, is with the entire structure of the family. The mother and the father's relationship is important. Obviously, the mother doesn't have an authority in this family, she's not in control.

Sounds to me like she's close to nervous breakdown, and these are the kinds of situations that would create nervous breakdowns. Quite often, divorces come out of homes like this, so it's a very urgent situation, one that needs attention right away.

You need to look at the whole of what we've said in our books. When your pastor says that your children are probably just bored, we've said over and over again that one of the big problems in homes, especially homes where there's homeschooling, where the children are kept at home all day long is boredom.

They'd be grouped into small groups, adversarial groups, and they'd be set one against the other. If you kept them there for weeks or months on end, then you'd have social problems. It's the same thing with children. You just can't cram children into a home and then try to order it so that there's quiet and order without giving them some outlet, some vent. So, yes, I think boredom's a big part of it.

But there's certainly a lack of respect, there's a lack of authority in the home. The mother must assume some authority, she must have some dignity. She must have some joy, she must make a statement and then stand behind it.
You just need to go back and look at the whole of what we've said and establish a relationship with your children that's one of love, one of imagination, one of expression, one of security, one of fun, one of joy, excitement about doing things, accomplishing things, doing things together. And in the midst of that, they won't have the time to stop and be rebellious and be angry towards one another.

In other words, if all you're doing is creating anger and resentment and you're upset, the children are upset. Then, there are other elements involved. Spanking is not the whole. In other words, you can't throw the whole of the child training or discipline into the spanking. If you are relying on that alone, and other things are not equal, then it will not work and it can become abusive.

They are going to continue their sloppy habits. You will spank them again and again for the same thing, for one reason, you are not consistent. If the spanking is not working, ask yourself the question, "What am I doing wrong? What other elements am I missing?"

Debi:  One point that you might try, that we get a lot of letters from parents that say every evening when the children are put to bed, they put on our tapes, "No Greater Joy." The volume set of tapes, and the children enjoy listening to stories about other children and how the discipline made them a better child. The parents say it's amazing how to fix their own children. Their own children get a certain pride in being a better child after listening to how bad the other children are, they don't want to be like the other children. So that's an idea to start training them.

Michael:  Yes. We get letters from people and we've talked with individuals where they said that their own children, seven, eight, nine years old begin to assume some authority in the home over the younger children or even or their peers, siblings that are older. In other words, they would say to mama, "Mama he is doing this or that. Don't you think that he needs a spanking?" Or "Mama, she is doing this or that. Don't you think needs to do?" Then the child will quote something from our book, and refer the mother to it.

They will see the necessity of it. They will even remind you some time when they have been disobedient of some of the principals or guidelines. They will develop insights, so it is really valuable to include your children, if not in listening to our tapes. Then in discussions about the why and wherefore.

When our children were younger, especially, we went through he books op proverbs with them. We'd let them read verses. We would discuss wisdom. They developed a lot insight into what God required if what was ideal in our relationship to our fellow man and our relationship to each other in the family.

Nurture your children and train them with admonishing. Whatever tool that might require, whether it's scripture, listening to our tapes, discussions or some materials you get somewhere else.

Announcer:  Thanks for listening; I hope it blesses your day. Don't forget to check out Cane Creek Corner for this week's specials.

4 comments on “Mail Bag - Too Much Spanking”