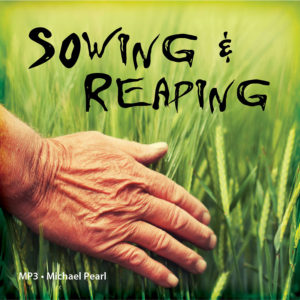 Announcer:  Every secret thing shall be brought into judgment. Nothing is left out.

Michael Pearl:  He will reap all that you have sown, all that has been sown. The Bible said that "God shall bring every work into judgment with every secret thing, whether it be good, and whether it be evil."

Michael:  When I was out in Texas two months ago at the International Knife Throwers Hall of Fame World Championship, I was down to the wire and beside me was a thrower from California. Big fellow, young guy, nice looking. I said, "What do you do for a living?" He said, "I'm an engineer for Google." I said, "Then you know all about us, don't you?"

He looked at me real sober, stopped, and stared at me like the devil himself or God Almighty, either one. He said, "I know everything about you." I said, "Well, I guess you could just publish anything you wanted to about any of us, couldn't you?" He said, "I could." I said, "You have my permission to publish everything I've ever viewed on the Web."

He didn't look like he believed me. Now think about it. If God's going to bring every work into judgment and every secret thing, that means there's nothing that's escaping his judgment. He sees and knows all. That means that the angels are standing around invisibly recording your every action, every word.

If Google can uncover your life—you'll be amazed at the stuff they can do—if they can go back years and come out with everything you've ever looked at, searched, or done, or read, think about what God can do.

There were two guys down here about 30 miles below us, lived way back in the country. They moved back there to escape the federal government. No electricity, no telephones, just got completely away. But one of the sons, older son, got a cell telephone. And he bought a new gun, a fine, long-shooting, sniper-type rifle.

He got on his cell phone and was talking to one of his buddies and said, "Yes, we could snipe Obama from a thousand yards with this one." Within five hours, there's a string of SUVs out there, black SUVs with a SWAT team, wanting to talk to him.

He thought he was hidden away deep down in the dark recesses away from the federal government. Now, his name is on a list somewhere. If the federal government can listen in to your cell phone and a computer can analyze it, and they can take two or three words you said, put it all together, and alert somebody in an office in Nashville, and they can put on their flak jacket, jump in and grab their assault rifle, and come find you at your hideaway house where you don't have a telephone where you don't pay for electrical bills, what's God going to do one day? Every secret thing will be brought into judgment. Everything you've done.

Now, there's little Baptist thing that if I just confess my sin, it goes away. No, it doesn't. God will forgive you for it, but it won't go away. It's written in the universe. It's written on the wind. It's written in the reflection as light beams infinitely out into space. If one could travel fast enough, faster than the speed of light, he could go out so far, turn around and stop and watch George Washington crossing the Delaware.

You could watch the events that took place in times past, seeing them as if in real time carried on the light rays way out in space. The sound that you speak, it never ceases. The words that you think and . . . somewhere in God's reckoning, the thoughts you think never go away. All of it will be brought into judgment, with every secret thing. You'll give an account and every knee will bow and every tongue will confess.

It's a fearful thing to fall into the hands of the living God, and fear of the Lord is the beginning of knowledge and wisdom.

Announcer:  We are happy you could listen today and hope you enjoyed it. Please remember to check out our great current specials.