Filter by:
NGJ Magazine / Articles / Working Character into Your Children, Part 1
Do you get our FREE Magazine? 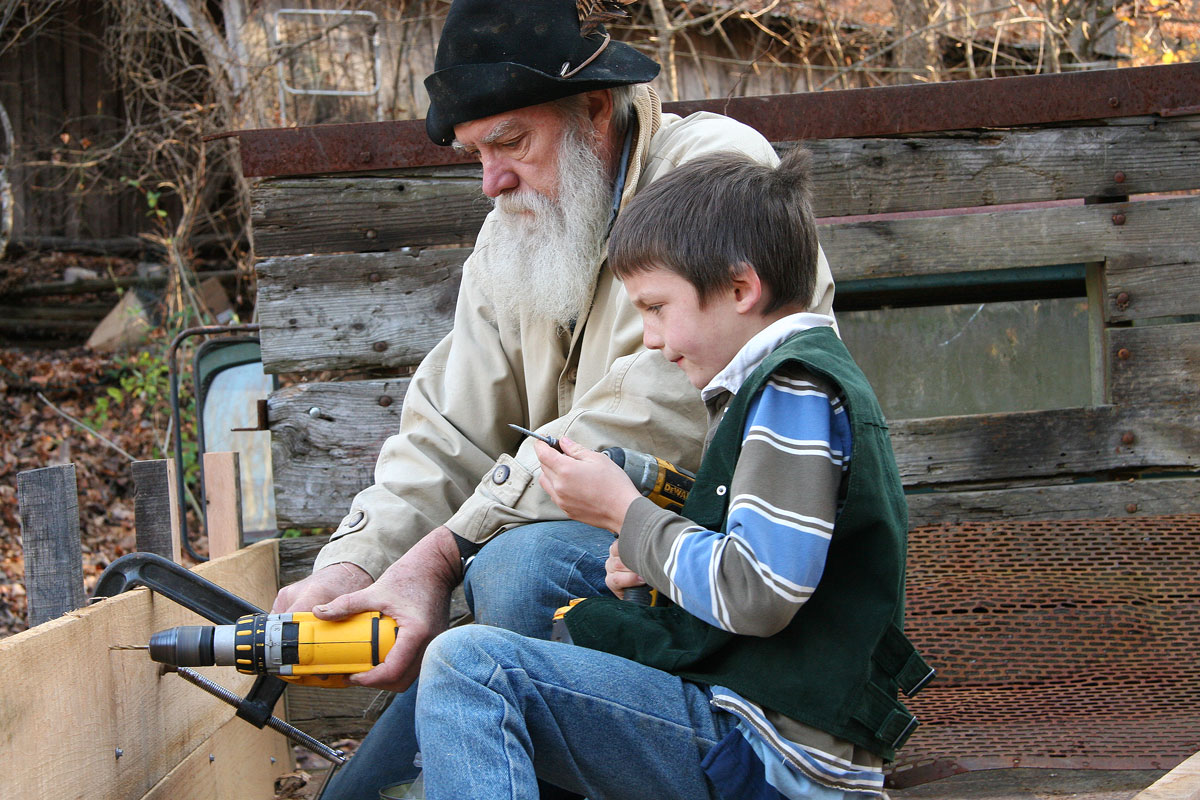 “All work is pain,” said a French philosopher. You don’t have to be smart to know that. I could have uttered such words of wisdom when I was five years old. The older I get the truer it becomes. We live in a plain community made up of Amish and Mennonite farmers and laborers.

They can work circles around me. I can’t even keep up with the kids and old ladies, but I have never heard any of them complain when the work is finished and the dinner bell rings. Even their horses and mules despise work. If you give a horse a choice, he would never work, and when you accidentally point him toward the barn, he will stubbornly pull at the bit, trying to get back to his quiet, comfortable stall. But in this community the horses, mules, kids, adults, and even crickety old grandmas perform their necessary labor.

Both of our sons are construction contractors, as well as most of the men in the church. Nearly all the young men in the community are raised working with their fathers or with other men in the area. It is a culture of hard work, and a man who won’t work receives about as much respect as a thief.

From time to time, new people move into the community. We have seen young teenagers come along and begin to work with the men. There is a marked difference between someone who is raised working and someone who didn’t work until he got to his teen years. The newcomer to work may learn to put in his time and even earn his wages, but he will never be committed to work like the ones raised working.

Now you may say, “But I don’t intend for my child to have to work with his hands; I want him to be a professional.” Children gain more from labor than muscles and money. I have noticed an interesting connection. The young men and women who learn to bear the yoke in their youth, develop an area of character that is purer and more honest than those that don’t learn to work early. It is almost as if those who never learned to work are always weak in resolve and commitment. When it comes time to sweat or bend their backs, they become men-pleasers, working with eye-service. They remind me of a fat person who sneaks around and lies about what he is eating. They feel the need to make a good show, but work is so distasteful that they are dishonest about it. These loafers are missing something in their character. There is an area of life that they avoid at all cost, and they are always the poorer in soul because of it. They are less likely to gain the respect of their fellow man—or their family, for that matter—and they are not as prone to become leaders. They are not as ready to endure hardship, including emotional and mental. All things being equal, they will flee from a marriage or job sooner than the ones who learned to bear up under work when young. They are less likely to sacrifice their comfort or rights for others. In short, the lazy child will grow up to be more selfish than the child who is taught to work.

The most obvious trait of the person raised to work is emotional stability. There is a calmness of soul and a confidence that accompanies the person who has persevered in the face of duty and suffered to the end of his day’s toil. He is less likely to be nervous and anxious. He finds a rest in his soul that the lazy loafer will never know. I believe that if you were to go to a hospital for the emotionally disturbed, you would find that a disproportionately high number of the patients were coddled and not taught to work when they were young. If you were to take a poll at the welfare lines or at the homeless shelters, you would find that majority of them did not come from secure families where they were led to work as children.

Working children, all things being equal, never have problems with poor self-image. It is the pampered, lazy kid that commits suicide gets on drugs or turns to freaks for companionship. Working children don’t poke their bodies full of holes and dye their hair blue. They do not feel the need to follow style. They know who they are, and they don’t need a gang to give them identity. Furthermore, the working child and teenager is more prone to respect authority and less likely to demand his equal rights. He is more independent, and rather than expecting someone to give him his fair share, he expects to have to earn his way. This makes him a more productive member of society, and the discipline he develops when working will enable him to better succeed in academics or in the corporate world.

I have observed that ministers and missionaries who came from a hard working background are more apt to respect the people to whom they minister. People who come from a working background are less likely to steal or cheat. To sum it all up, a balanced experience of work will instill integrity, a good attitude, diligence, and perseverance in a child.
Now, I have not taken a poll. I have no way of proving these things, but it is what I have observed in a half century of studying people. My conclusion is that no matter what your child is going to do in life, whether a concert pianist, a politician, an attorney, a banker, or a missionary, the best preparation of character, mind, and body is to be engaged in responsible and productive labor when young.

All of us can point to exceptions to the trend I have noted. You will remember that I qualified my conclusions with the statement “all things being equal.” A child who is worked like a slave or one who is taught to work but is abused or neglected in some way, will not do so well. Likewise, there are those who did not work as children, but were vigorous and committed to personal goals, and, at the first opportunity, they did launch into work with a zeal equal to those who were brought up to work. Yes. There are definitely exceptions to the rule, and the exceptions may be many, but the rule—representing the majority—still applies. One could take a chance and hope his pampered child would somehow be one of the exceptions, but I would never take such a risk with a child in my care. They will learn to work at the same time they learn to play. Mine did, and they all represent themselves well to this day.

The sum of the matter is that work is a necessity of life. It takes unpleasant work to provide the basic essentials of life for ourselves and for those for whom we are responsible. We have a duty to work and to pull our share. To do one’s duty is a moral obligation. When a child grows up slothful and dismissive toward his duty to work, it ingrains in him the concept of neglecting distasteful duty in general. The neglect of duty is shameful in any culture. The performance of duty is the measure of a man, or child. Shirking duty is the lowest form of social cowardliness. To shirk one’s duty and still be received in society, one must manufacture the appearance that he has done his share. He must procrastinate, make excuses, lie, connive, and blame others. To manipulate others into doing your duty is to place a low value on your honor and a lower value on the person forced to do your dirty work. It is pride.

A child who grows up facing up to his duty to work, grows into the concept of sacrificing for others and suffering for what is right, acting responsibly no matter how much it hurts, and paying the price to do what one ought to do. Everyone likes a person who is the first to step up to the work. It is a compliment to others and an act of humility to step forward and clean up after a party, to work in the parking lot at church, to replace the roof, to cut the grass, etc. A man that always has a slick way of bowing out is viewed with disgust and distrust. He appears selfish and always seems like an outsider and a user. When someone tells us a bad rumor about a hard worker, we are doubtful that it is true. We don’t want it to be true. It doesn’t fit what we know of his character. When the same rumor is told on one who shirks his duty with manufactured excuses, we think, “Well, I always knew there was something dishonest about him. He is just the kind of person who would do something like that.”
To go through youth avoiding work is an indulgence in the art of deception and blame. To come to adulthood having neglected responsibility is to come with a character that is shadowed and devious. There is no better context in which to instill character in our children than in the performance of their duty.

We will have to save a discussion of the practical side of children working for our January issue. In the second half, we will give you some ideas about how to involve them in work, but for the moment, let us leave you with one critical principle that cannot wait. Children will NOT do well working FOR YOU. They should be led to work WITH YOU. Always do more work than they do. Let their participation in work be in proportion to their physical and emotional strength. Don’t push them to the point of frustration and exhaustion. Don’t become a hard taskmaster with threatenings and intimidation. That is totally counterproductive. Work must be made enjoyable though social exchange. Working together to achieve a common goal can be fun. If you are not comfortable with putting your children to work, don’t spoil it by becoming overbearing. Look in our other writings for discussions on working children or wait until the next issue before becoming a Pharaoh and putting the children to making bricks.

In the January issue we will give you some ideas on how to get children and teenagers involved working. If you have any good stories or observations, I might be able to use them in my next article. Questions are welcomed also.
Michael Pearl

One comment on “Working Character into Your Children, Part 1”