Our Vision for Good and Evil (Book and Video) 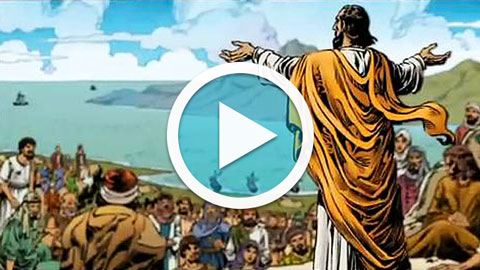 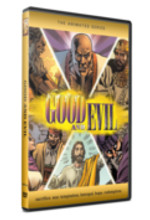 No Greater Joy Ministries (NGJ) is the outflow of one family, Michael and Debi Pearl and their five children and 19 grandchildren (so far). We Pearls are and were missionaries long before we were “child trainers.” Our vision has always been to tell the whole world about Jesus. We have continued to do that in ways you’ve never hear about. Deb and I are thrilled to be engaged in the most colossal outreach of our lives. We are taking the gospel to the whole world.

Let me tell you how it came about. When our daughter Rebekah (born 1974) was a missionary in Papua New Guinea, she struggled to communicate the gospel to a tribal people whose language she was still in the process of learning. They were eager to know and she was handicapped by the fact that they could not read and their language was unwritten. We learned of the chronological approach, with the missionary using simple line drawn illustrations, something like what you see in a child’s coloring book. It works great, but it has to be accompanied by a missionary. God gave us a vision of producing the Bible story from Genesis to Revelation in a self-propagating format that has legs of its own.

Some people told us that we were reinventing the wheel. There are many illustrated Bible story books on the market, some in the major Asian languages. Yes, we contacted them. Their pricing was prohibitive, the number of languages limited. The contents were sometimes childish, and the art just plain boring. We wanted to be able to give a missionary the rights to publish by the millions and to translate into any language. So, “If you want it done right…”

Michael wrote the story and drew the original sketches, and then we retained Danny Bulanadi, a world famous artist who had retired from Marvel Comics, to do the illustrations. It took three years of nonstop work. Then came the colorization, followed by the bubbles and text entry, and finally the proofing—seven years and over $200,000 and we were ready for print in English. But that was just the first step to our goal of 100 languages. A missionary already working in the field of translation and publication showed interest in our project, so since 2006 under his direction we have financed a translation house in Thailand where several people of various Asian languages sit behind computers formatting multiple languages that have been translated, proofed and reproofed. As of 2011 we have published, printed, and distributed Good and Evil in about 35 languages. Many more are somewhere in the process of translation or formatting. Some languages are ready for print and we are just waiting on the funds or on a missionary to request the printing.

We can have this 312 page book printed in black and white overseas for between $2-3 per book. Think of it – a faithful missionary for less than three dollars! Good and Evil is a bold missionary. It can squeeze its way into closed countries where missionaries are not allowed. Its fantastic art, done in the popular style of Marvel Comics, makes it popular where other gospel literature would be rejected or destroyed. You can walk up to a Muslim or Buddhist street vendor and give him a box of these books and he will sell them, not caring that they advocate Christianity. After all, profit first. These little missionary books will keep telling the message over and over again as they lie around waiting for someone else to pick them up. In many cases a single copy will be read by as many as 100 people. That would be about three cents per person to communicate the message of Christ. It is our mission to send these little paper missionaries forth into every little nook and cranny on the globe, that every man, woman, and child may hear the good news of Jesus Christ.

To that end, it is our vision to translate Good & Evil into 100 languages. This is no easy task, but neither is it an unreachable goal. We are over 1/3 of the way there. If you have a heart for a particular language group, you and your church could finance the translation and printing of this book in that language.

We do not make any money from the sale or distribution of this book when distributed to missionaries. All money designated to a particular language or to the project goes directly overseas to finance the work. Nothing is withheld here at No Greater Joy Ministries. We are financed by the sale of our materials in English and do not tap into missionary funds. Furthermore, if you wish to work independent of us, we will guide you in the translation and printing of this book, expecting no remuneration. There are no royalties. We maintain control of the intellectual property so we can continue to give it away in all the languages of the world.

Untold millions will soon be told and you can be a part of it!