Filter by:
NGJ Magazine / Articles / A Mule Has Two Brains
Do you get our FREE Magazine? 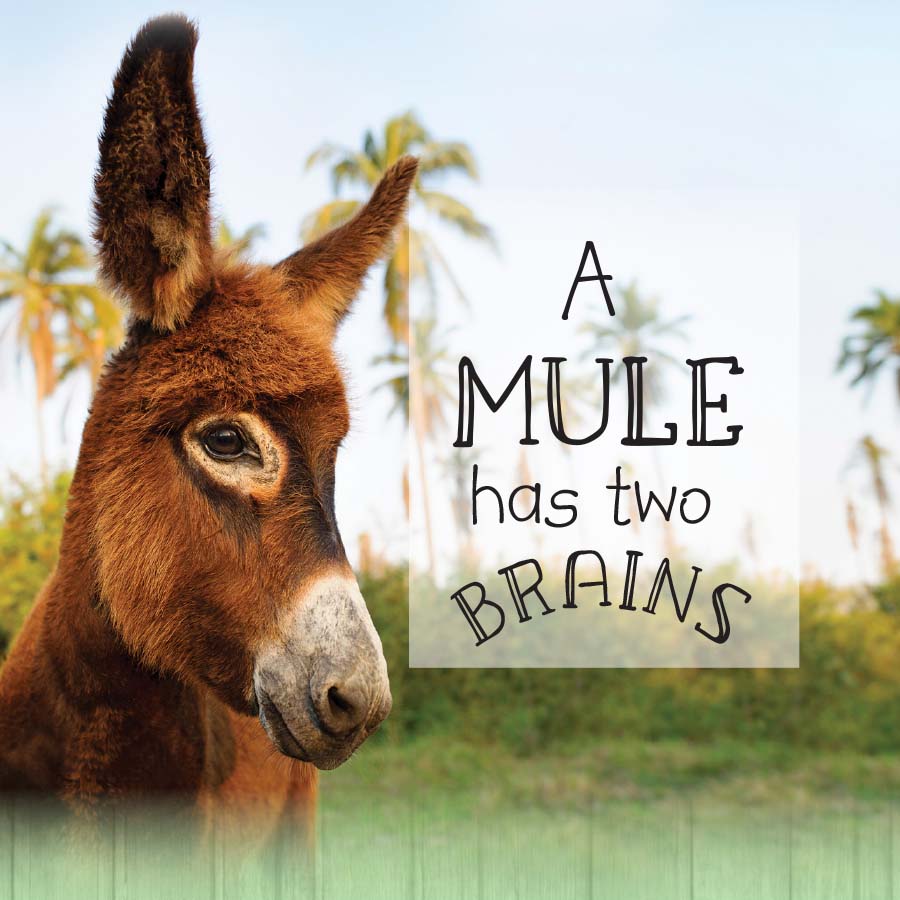 Just the other day, I heard an old mule trainer make one of the wisest statements about child training I have ever heard.

He was not talking about children; he was talking about one of the most notoriously stubborn animals that man ever made. You read it correctly—man makes mules. God wouldn’t make anything that contrary. Horses and donkeys won’t breed in the wild. They have to be coerced into breeding, and the result is an animal as strong-willed as any four-year-old that ever humiliated his mother in public.

The expert mule trainer said, “A mule has two brains: one Acting Brain and one Reacting Brain.” He was not talking about the physiology of the mule; he was talking about its psychology. He went on to explain that as long as the mule is calm, he is thinking and trying to relate to you. In that mental state, you are able to communicate with him and he is able to discern what you want and how to please you.

But if you push the mule too far and respond to him in anger or frustration, he decides that he cannot please you and he starts reacting to your aggression with his own aggression or with flight. Your goal is to get the mule to voluntarily cooperate with you—to think and to act. If you get upset and the mule gets confused, he starts reacting instead of acting. In that disturbed state, the mule is not capable of learning anything other than to fear you and resist you. When he stops trusting you and thinking in terms of pleasing you, you may intimidate or beat him into submission, but you have not trained him. If you swing at someone and they duck, you have not trained them to bow in respect. You have clearly gotten a reaction, but not an action that you can expect them to voluntarily repeat in response to a verbal command.

Isn’t it interesting that animal trainers know the importance of understanding and of patience in training? Most parents treat their children like wayward rebels to be managed, not trained, acting more like correctional officers just trying to survive until their shift changes. They ignore their children until their behavior becomes so irritating that the parents are provoked into reacting. When they finally confront them and trade verbal punches, inevitably one of them gives up in exasperation. Everybody is reacting and bouncing off of the others’ displeasure. Then parents wonder why their kids are never trained.

Remember what the mule trainer said, and apply it here. When the kids stop functioning in their Acting Brain and start functioning in their Reacting Brain, you may eventually intimidate them into compliance with sufficient threats and manipulations, but you have not trained them in the least. They will learn to avoid doing certain things because of the consequences, but they will never under those circumstances develop any character. They will not respect you, honor you, or want to emulate you in any way. They will react to you until they get to be a full-grown mule, and then they will kick you into reality.

The mule trainer went on to say that you must win the confidence of the stubborn mule. You must lead him to trust you when you are in the training pen with him. He must be relaxed. If you sense that the mule is tense, don’t try to get him to obey a difficult command. Win his confidence and get his attention before you proceed any further.

What wisdom! Many of you say with feigned indignity, “But my child is not a mule!” No, he is not. So why do you give less attention to training him than does a man training a mule? Why do you think your child should be able to function well under tension and pressure when a thousand-pound mule cannot? Why not be at least as patient and thoughtful as a mule trainer? Quoting Bible verses to a distraught four-year-old is about as effective as quoting them to a mule.

So, now that I have described your situation exactly, what can you do to reverse this trend? Start by convincing your child that you have goodwill toward him, that you are delighted with him, that he makes your life full and rich. You can’t do this in times of confrontation. You would look and feel like an imbecile if you started warm, fuzzy talk with him when the kid simply needs rebuking. In the good times, take your child by the hand and do something fun together. Enjoy his projects. Laugh at his antics. Call someone else, and let your son hear you tell them how smart or strong or tough he is. Be creative in devising ways to be pleased with your child.

Remember this well: As a parent, it is your responsibility to cultivate a mutual feeling of goodwill between you and your children. When your child can relax in your presence, then—and only then—you can train him in obedience that leads to character. When your relationship gets confrontational, the only thing you can communicate is that you are tougher than he is. He needs to be assured of your toughness, but it is pitiful indeed if that is the sole basis of his obedience.

So let’s finish where we started. A child (like a mule) has two brains: an Acting (thinking) Brain and a Reacting Brain. The reacting mental state is not a trainable condition; the thinking brain is. So learn to think and act; don’t wait until both of you are reacting. Don’t let your son grow up to be a mule, for you already know what that is like.

Thank you for this article. While I understand you are not referring to special needs children here specifically, I can’t help but think how very relevant this is in parenting children with special needs like autism. My 14-year-old son has high functioning autism and part of parenting him has been learning to decipher if his panicky behavior or meltdown, etc. was in response to his sensory processing disorder (in other words, being overwhelmed by sights, smells, touch, etc.) or if he was willfully disobeying. Being able to differentiate the two makes a world of difference. We also homeschool, and I can tell you that when his senses are overwhelmed, very little learning takes place and I have to work around this or change our strategy for that day. When my son’s nervous system is calm he is in a much better position to rationalize, understand and follow instructions, learn his schoolwork and get along with his brother. After years of therapies, diet, vitamins, herbs, etc. under the care of physicians, I’m pleased to say he’s come a long way and this article reiterates, in a round-about way, what many special-needs parents find helpful. Thank you.