Filter by:
NGJ Magazine / Articles / Boys, Snakes and Men
Do you get our FREE Magazine? 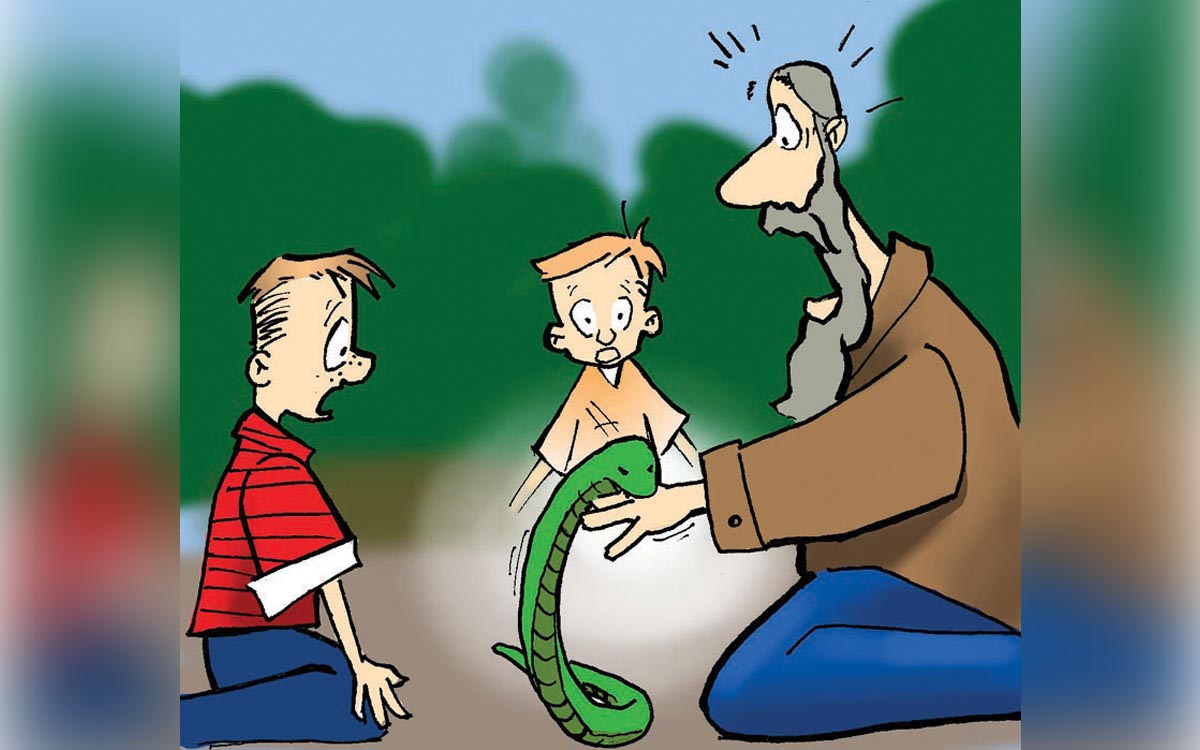 When I was about twelve, I had 26 snakes in captivity and about fifty lizards. The snakes were non-venomous—what we called spreading adders—pronounced “spreadin-adders.”  Some people who didn't know better called them hoghead snakes.

When alarmed they would rear up in a threatening manner and spread out like a cobra. It sent a scary thrill through any young boy. Conquering that fear and mastering the snakes must be part of a boy's self-imposed maturation ritual. We found no satisfaction in killing snakes, except when we discovered a poisonous one in the yard. I never had any affection for snakes, but to catch one and hold its cool, dry, wiggling, body in your hands, and then to turn it loose to slither away to its shadowy existence was a mastery of self more than of the serpent.

At the time I had my snake collection, we lived in the middle of a big city. I would go to vacant lots and dig around under boards and bricks until I uncovered a snake or lizard. On several occasions I made my way into the open drainage ditches and located pools of water where I could observe or capture these city-bound wild creatures. One time I built a big box for my collection of snakes, turtles, and lizards and placed it on the screened-in back porch. I would tend to them every morning before catching the city bus to public school.

My mother would shriek and shiver every time she got within sight of my captive creatures, but that made it all the more thrilling. Then one day I came home to find that someone had tampered with the box, and my zoo had escaped. Twenty-six snakes and a tub full of lizards had all gone somewhere. My mama wanted me to assure her that none of them had crawled into the house. When I stood there looking blank, she went into the vibratingest shivers I had ever seen. It made me feel downright superior to the female race. But when she pulled all her pieces together, she laid down the law. I don't remember what she said, but I can still remember the intent. I had no doubt discovered the limits of the female psyche.

I found several of the snakes on the back porch and around it. I took them to the nearest vacant lot and carefully and ceremoniously placed them under a pile of old carpet and rotten boards. I continued to visit them throughout the summer. Fall came. They disappeared into their hibernation holes, and the next year the lot was cleaned up and paved.

This past week, the boys and I spotted a big chicken snake slithering across the driveway. They eat rats and mice and smaller rattlesnakes and copperheads, so we don't harm them, but I thought it was time I upgraded the boy's respect for Big Papa. We jumped out of the truck and ran over to the snake. It coiled up in a threatening manner and began to strike at my boots. When I was a kid, I would tease non-venomous snakes into striking at my hand, and then when their bodies were fully extended I would grab them by the head. If you are fast with your hands, and your timing is just right, you can do it every time. I told the boys what I was about to do and then talked them through every step. I had their full attention. Several times I teased the snake into striking at my hand so I could gauge the extent of its reach. Then, when the moment was just right, my hand shot out faster than a streak of... Well, there I was trying to gain their respect with this five-foot chicken snake clamped onto my finger. I don't remember snakes being that fast. This one must have been weaned on mama rattlesnakes. He was fast! Or maybe this boy is not as fast as he was 45 years ago.

I glanced up to see the fellows looking horrified. I explained to them that it was not poisionous and that it would not hurt me, and I let the undisputed champ slither off the driveway and into the grass. I showed them the teeth marks and the small amount of blood coming from the bite and then went into the house to wash out the wound. Don't write and warn me of the danger of infection from a non-venomous snake bite. It has been a concern to me the last 40 times I have been bitten—no infection yet. The thirty-ninth bite must have been fifteen years ago when my boys were young. There is not going to be a forty-first bite. I am going to have to find some other way to impress the grandkids that are coming on.
But all was not lost. The boys were still impressed that I did not cry or panic when I got snakebit. When they get back to the orphanage they will have another story to tell, and what is life without some good tales?