Filter by:
NGJ Magazine / Articles / Birthday Toolbox
Do you get our FREE Magazine? 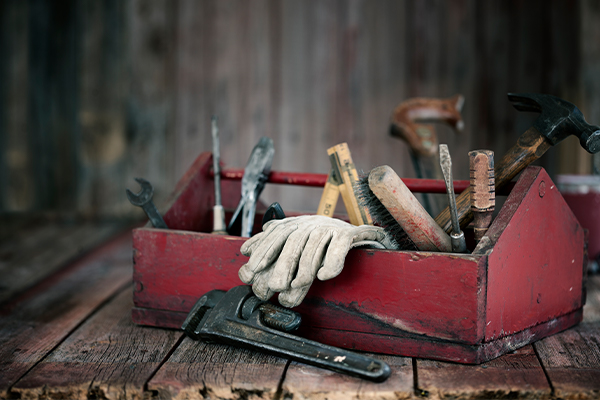 Yesterday I saw child training at its best. The fact that it was my own son-in-law training my favorite grandkid amplifies the pleasure.

For his third birthday, Lincoln received a toolbox—a real toolbox that any man would covet, one that could last throughout his entire life. Lincoln takes his toolbox very seriously. To his way of thinking, a man (three-year-old) is defined by his tools and the things he accomplishes with them. When he received the toolbox, someone visiting asked him if it was a birthday gift. He displayed an incredulous look and exclaimed, “No, it’s for tools.” He thinks, “How could anyone not know that tools are a necessity, a way of life? Birthday presents are frivolous, passing fancies.” So fortunately, they had also given him a $15 inflatable, air-powered rocket from Costco. Now that was a birthday gift, the kind of thing that after the second launch the wind changes and it gets stuck in a tree. Oh well, it lasted most of his birthday. Nothing to get upset about.

But tools are a different matter. For two days Lincoln has scavenged the property, locating any tool that was left lying around. He even found several that had been lost in the grass or discarded because they were broken. The next day Lincoln was hovering over his toolbox, managing his horde of scrounged implements, when I walked up to talk to his daddy. Dad looked down and saw the little mechanic rearranging an old, rusty window glass scraper he had found that contained a razor blade at the end. Dad immediately bent down and snatched up the tool, saying, “You can’t have that; its dangerous.” Always (at least until then) compliant Lincoln said, “No, it’s mine.” Dad responded with a dismissive final word: “Its sharp on the end and it could cut you bad.”

Reaching and looking offended while sounding distressed, Lincoln again said, “No, it is mine.”

He had found it where it had been thrown away, so he felt entitled to it. Tools are sacred things; you don’t mess with a man’s tools.

I have seen Lincoln whine or have a face of displeasure only two or three times, so I was surprised at his hurt defiance.

What would Dad do? Moments like this are the big deals, the situations where you train them to yield to authority while keeping their hearts. It was a dangerous moment when James, Lincoln’s dad, could have planted a seed of resentment that would form the grain of sand to which other offences would attach themselves and grow a rock-hard heart beneath the surface until one day his parents say, “What got into that boy? We raised him right; why is he so angry? He acts like we are the enemy. Where did this bitterness come from?”

I am proud of all my sons and daughters. They are exemplary in their child training, producing the most amazingly stable, happy kids. So I was gratified to see how James handled the crisis. Most parents would just walk off with the tool and dismiss the child’s protest as unworthy of attention, but James was sensitive to the moment. He stopped talking to me—stopped the rotation of the world for just a moment—and squatted in front of his offended son sporting a frowny face. As he tried to explain, Lincoln kept his eye on the tool waving around in James’s hand. James sensed something which led him to make a brilliant move. He laid the tool down on the floor between them as if to suggest it was up for negotiation while they carried on a conversation. Lincoln immediately relaxed and looked into his father’s eyes instead of at the tool, which was no longer in danger of being unjustly snatched away. James explained to his son that the tool had a razor blade embedded in the end. When he again picked up the tool to demonstrate, Lincoln was not alarmed; they were reasoning together. James picked up a board and make a long cut across it. Then he pointed to his arm where the veins and arteries were visible and, pointing, said, “If another child was here who did not know how to use this tool, he might pick it up and cut his arm; the blood could run out until he died, and you wouldn’t want that to happen, so we need to put this tool up somewhere safe where no one will be hurt by it.” The discussion went a little longer with thorough explanation, and Lincoln understood that Dad was not being selfish in confiscating his tool; he was being cautious of the safety of other little kids who might not be as wise in handling tools.

Lincoln understood, “Dad has my best interest in mind.” A spirit of good will prevailed and Lincoln cheerfully resumed pulling out the drawers and rearranging the pliers, crescent wrench, screw drivers, and rusty whatnots. Don’t mess with a man’s tools or a child’s heart.