Filter by:
NGJ Magazine / Articles / What God Has Done!
Do you get our FREE Magazine?

By No Greater Joy Ministries
January 1, 2003 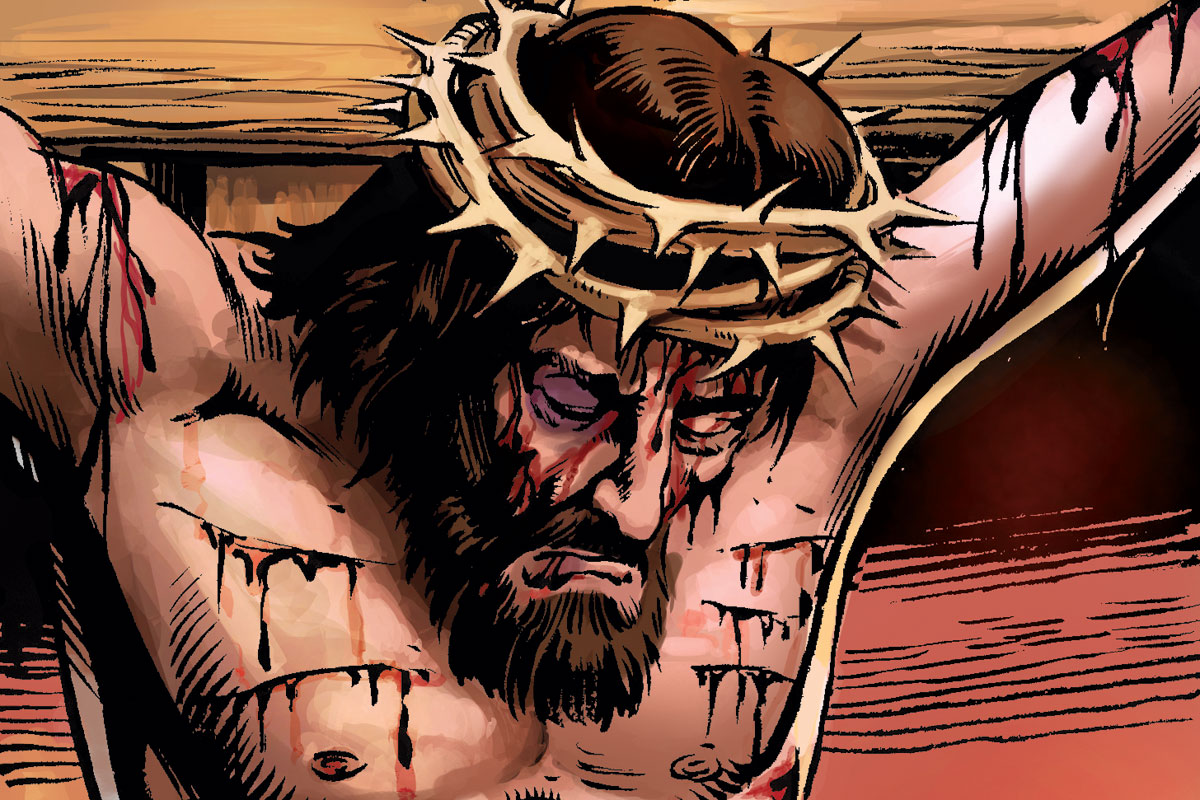 Jesus Christ, God's sinless son, covered with all the filthy deeds of degenerate mankind! Who would dare?

God dared—dared—to give the life of his son in payment for your lost soul.

BUT WHY DID JESUS HAVE TO TAKE OUR SIN TO HIMSELF BEFORE HE COULD FORGIVE US?

To die in our place, Jesus had to become exactly what we are—SIN. We have saturated our lives with selfishness, lust, pride, resentment, bitterness, and hostility. Can you look in the mirror and praise what you see? God sees much deeper, and is very displeased.

“For from within, out of the heart of men, proceed evil thoughts, adulteries, fornications, murders, thefts, covetousness, wickedness, deceit, lasciviousness, an evil eye, blasphemy, pride, foolishness: All these evil things come from within, and defile the man” (Mark 7:21-23). Your very thoughts have defiled you. You are what you think. Every vile act began as a thought. You are no better than your thoughts, and without God may one day become as bad.

God judges more than the act, he also judges the intentions of the heart.

God sees the lust in your heart as being adultery. “But I say unto you, That whosoever looketh on a woman to lust after her hath committed adultery with her already in his heart” (Matt. 5:28).

God sees the hate in your heart as murder. “But I say unto you, That whosoever is angry with his brother without a cause shall be in danger of the judgment…but whosoever shall say, Thou fool, shall be in danger of hell fire” (Matt. 5:22). God records every sin to be used against you in the Day of Judgment. You have built an airtight case against yourself. Have you ever wondered what your record (all your thoughts included) might look like so far? Would you be ashamed for your mother to read it? “Be sure your sin will find you out” (Numbers 32:23).

“For God shall bring every work into judgment, with every secret thing” (Eccl. 12:14).

God will return “In flaming fire taking vengeance on them that know not God, and that obey not the gospel of our Lord Jesus Christ: Who shall be punished with everlasting destruction from the presence of the Lord, and from the glory of his power” (2 Thess. 1:8–9).

“BUT WHY DOES GOD HAVE TO GET SO ANGRY AND DAMN EVERYONE OVER A FEW LITTLE SINS?”

It is our attitude that sin is “little” or of no significance that makes us blameworthy and damnable in God’s sight.

If God did not intervene, sin would still end in death. You have seen sin strangle love, shatter the family, stab friends in the back, mock things that really matter, turn its back on compassion, lie to the conscience, and knowingly do the very things that bring regret in the morning.

God has promised to put an end to sin. He has condemned sin and everything associated with it, including the earth we are living on. Sin eternally separates one from God. As long as you are engaged in sin you are the enemy of God, and are destined for destruction.

HELL IS A REAL PLACE

“So shall it be at the end of the world: the angels shall come forth, and sever the wicked from among the just, and shall cast them into the furnace of fire: there shall be wailing and gnashing of teeth” (Matt. 13:49–50).

God did not create Hell to satisfy his anger but to satisfy his holiness. HELL IS EARTH’S JUNK YARD, THE HAZARDOUS WASTE DUMP OF THE UNIVERSE. It is the black hole that finally sucks in all that is rebellious, unkind, proud, lustful, and destructive.

Even in the eternal torment of The Lake of Fire, sinners will not repent. Their hatred for God and all that is righteous will grow with the passing of centuries. May God help you repent now, before your heart gets too hard.

But God Made A Way

Knowing the awful damnation we would suffer, God devised a method to save us.

Compelled by his love, Jesus Christ stepped out of eternity and into time and space. He reduced himself to human flesh and entered the world by the womb of a virgin. Thirty-three years later, before leaving this planet, he dressed himself in our sins and became a sacrifice to God by bleeding to death on a Roman cross.

THE CROSS WAS A SLAUGHTER.

Christ was first given 39 lashes from a “cat of nine tails” (a whip with nine leather straps, each bearing a cutting instrument at the end) providing a potential of 351 lacerations. He was blindfolded and beaten beyond recognition. They pulled out his beard and placed a crown of thorns on his head. With mocking hostility, the religious in the crowd spit into the blood that streamed down his face.

As he stood in silence, the greatest pain was not the thorns scratching his skull or the flesh dangling from his back; IT WAS THE SHAME OF OUR SIN.

He Took Your Place.

ALL SINS of ALL PERSONS, past and future, were laid on Christ. HE BORE THEM SO INTIMATELY, THAT THE BIBLE SAYS HE BECAME SIN. He “despised the shame,” but for our salvation he “endured the cross.” Imagine! The most pure and holy taking the place of the most impure and unholy!

“For Christ also hath once suffered for sins, the just for the unjust, that he might bring us to God, being put to death in the flesh” (I Pet. 3:18).

CHRIST’S ARMS WERE NAILED WIDE OPEN TO RECEIVE ALL WHO WILL COME TO GOD FOR FORGIVENESS.

Do You Believe This Good News?

He did it all for you, rotten filthy you.

If you desire God, and you believe with all your heart, your sins are all forgiven. “For God so loved the world that he gave his only begotten Son, that whosoever believeth in him should not perish, but have everlasting life” (John 3:16).

It is not religion. It is the person Jesus. Trust him. Love him. Follow him. As you believe this good news your sins are forgiven and God will change your life. Find some place to get alone and thank God for being your Savior.

NGJ will send you this tract (paper copy) free of charge upon request. You can order copies in bulk of the God Made Jesus to Be Sin gospel tract in English, and they are also available in Spanish.

From Our Mailbox - A "Saved" Amish Lady