Filter by:
NGJ Magazine / Articles / Corny, Ten Different Ways
Do you get our FREE Magazine? 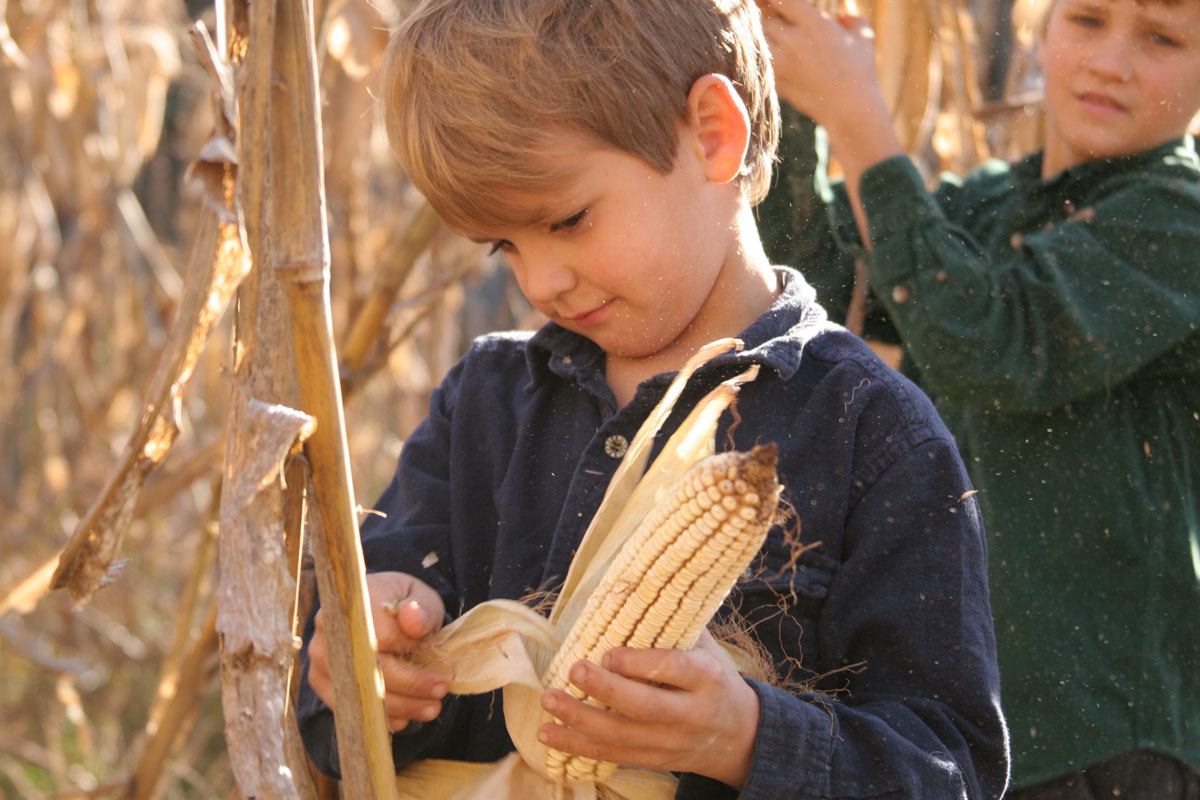 When we moved to Cane Creek 11 years ago we went from the haves to the havenots. We weren’t exactly affluent but we had what we wanted when we wanted. Moving here changed all that. We sold our four acre estate and bought 77 acres of rough woodland with 8 tillable acres. After paying for the land, we had $7,000.00 left with which to build a house and barn, and live on while we were doing it. To get lumber for our house Mike and the two boys cut down trees, dragged them to the house with a horse and mule, and then sawed the logs into lumber on a sawmill he had previously built for that purpose.

They had the easy job. I had to learn how to feed the family on $10 or less each week. Fortunately I had spent the summer canning and had 300 quarts of fruits and vegetables to add to our larder. But when you divide 300 by one or two quarts a day and divide that by 5 fast growing kids and a mom and a dad, you don’t have much food. By November I knew we were in for a lean winter. When a man came by and offered to sell 100 pounds of cabbage for 10 cents a pound I decided it was a good idea. He told me if I placed the cabbage under our 12 X 16 foot cabin and covered it with hay it would keep all winter. Another lady sold me 100 pounds of sweet potatoes and Irish potatoes, which we also kept under the cabin covered with hay. Still you divide the pounds of food with the mouths to feed by the days and you don’t have many days to eat.

I guess the old man down the road figured the dumb city folks needed a helping hand. He brought over a small sack of brown looking rough corn meal. He explained to me this was just field corn, the kind you feed to animals. Any dried corn will do. You can buy it straight from a farmer or from your local farmers co-op. It is cheaper than potting soil. This past year we paid less than $3.00 per bushel. A bushel will fill up two five gallon buckets. A pick-up truck full would only cost $50.00. It is easy to store. Some farmers just dump it in an open bin in the barn. You can put it in barrels, buckets, or boxes. It must be kept dry, and in warm weather it must be sealed or the bugs will eat it. There are easy ways to kill the bugs before sealing it in buckets. You could get that information from a library (as long as they remain open). But we planned to eat it before the next summer. A bug or two never hurt anybody anyway.

He told me to roast it lightly in the oven (Indians put the whole cob in warm ashes until it roasted to a golden brown) and then grind it coarsely with my cheap little flea market grinder. If you didn’t have a grinder, you could do as the Indians did—beat it with a piece of wood. For breakfast every morning we would stir it into boiling water to make a delicious hot cereal. Our neighbors call it corn mush. A bushel or two will provide breakfast for the family throughout the winter. The first time we tried it we added a little cream given to us by a neighbor. It was delicious. You will recall that roasted corn was what Boaz offered Ruth when he woke to find her at his feet. The leftover corn mush soon firms up and can be sliced and pan fried to make an evening snack. The snack would never make it to McDonalds as a famous special, but it was almost free, and filling.

A few days later, after telling my neighbor how much we enjoyed the corn mush, she saw my eagerness and told me how to make hominy and corn tortillas. Years before I had watched the Indians do this in Belize, C.A., but now I was to try myself. I took the same dried corn and put about 4 cups in a large pan of water. Then I took the hardwood ashes right out of my wood stove and sifted about one cup of ashes into the corn and water. These ashes contain lye and will make the outside hull of the corn soften and come off. The ashes can also be used for making soap, cleaning bug infested areas, treating certain skin fungi; and they are great for keeping bugs off of the corn when you store it in the barn or in any open container. I cooked the corn with the ashes for 30 minutes and then checked it. After several tries the outside of the corn was soft. If your ashes are finely sifted then it is easy to wash the ashes out of the corn; otherwise it takes a while. If you want hominy then put the cleaned corn back on to cook until swollen double in size and tender, which should take about an hour or more. If you want corn tortillas get out your old flea market hand-grinder and let’er go. With a little water the mush dough that comes through the grinder can be made into one-inch balls.

The Indians in Belize left their corn soaking in the ash water until they were ready to make a meal, then they took just what they needed. Water was not abundant so they carefully scooped the top floating corn so there was little washing. They didn’t have a grinder, so they pounded the softened corn with a large stick to bring it to a dough consistency. The dough can be patted out and cooked in a dry pan (no oil, just sprinkle dry corn meal to keep dough from sticking). Now my horse feed corn was making us breakfast and lunch, but we are not through yet! Being from the south I was raised on corn bread. Everyday I would grind the dried corn into cornmeal and mix salt, baking powder, and sour milk (if we were really rich I'd add an egg) and pour into a hot oiled iron skillet to cook for dinner. Often the next day the left over corn bread was crumbed into a bowl with water, onions, sage, salt, pepper, celery seed, chicken seasoning, chopped cabbage and/or minus or plus anything I thought might taste OK. This mixture was baked into a dressing. With a little seasoning, corn was feeding us well. So there we sat eating hominy, cornbread, dressing, corn tortillas, dumplings, hot tamales and corn mush patties. With the addition of sweet potatoes, and cabbage we were eating fine.

Before the winter was over I was making stuffed everything with anything. That long, cold, lean winter finally ended. We planted the leftover corn that Spring. I learned that in time of famine the humble corn seed can feed a family well. I also learned being poor can make you or break you. Sometimes a family’s greatest handicap is having too much too easy. Creativity, work ethics, confidence and emotional balance are often sacrificed in the wake of a parent being successful. Even in the middle of washing our clothes in a large vat over a fire while trying to figure out what I could feed the family next, I was happy, happier than I could ever remember. And when Nanny and Daddy Bill came to visit and brought peanut butter I was thrilled. We learned how to be resourceful because we had to. We learned how to be thankful because doing without made having a little seem so good. We learned how to work together because we needed each other to survive. Our children weren’t told they were needed, they weren’t patted on the back when they did their chores, they weren't given positive affirmation by reminding them how important they were, they were living in reality. They saw that what they did mattered. A life like that grows strong kids. They learned to be survivors. Don’t regret your struggles; joy in the opportunity to grow. Don’t fear tomorrow; make a plan to overcome. And when the lean times come, remember, you can always eat corn.

Rising to the Challenge

What is That Fragrance?