Filter by:
NGJ Magazine / Articles / The Gospel Box
Do you get our FREE Magazine? 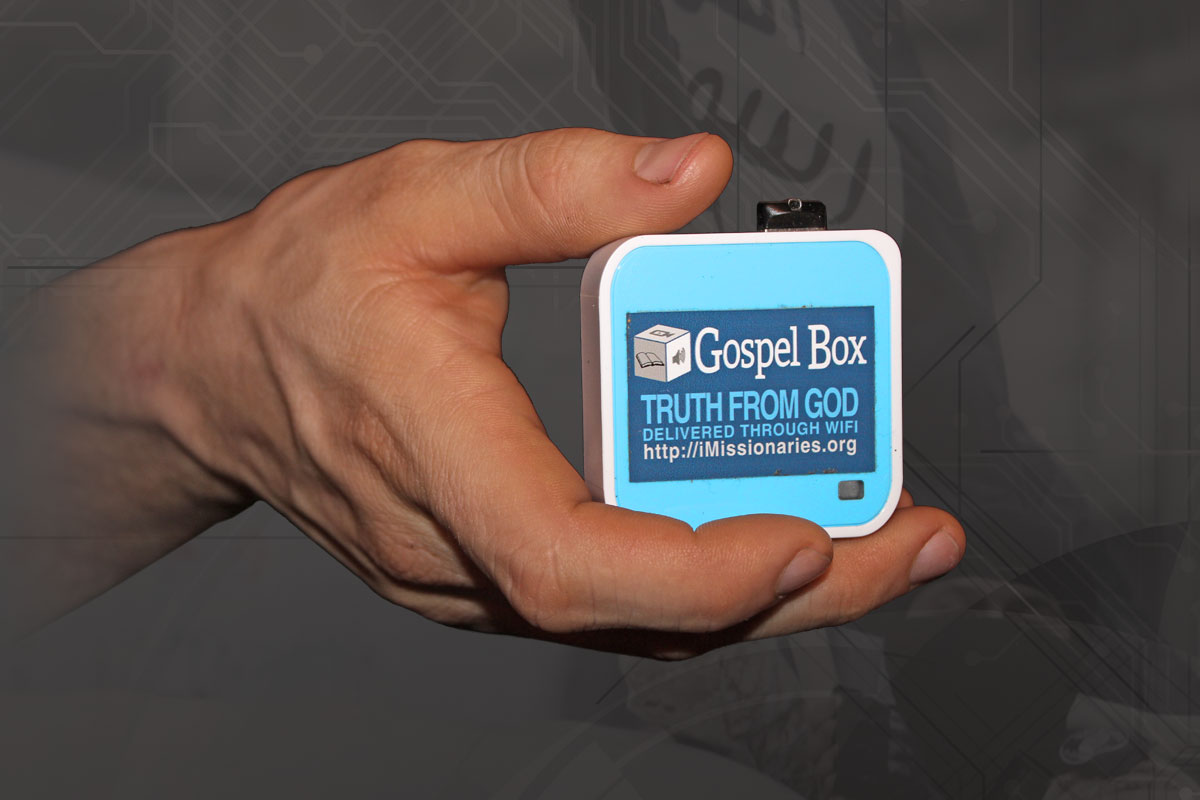 Twenty-two-year-old Abu Hamzeh slightly shifts the position of his US-made M-16 and silently curses into the wind. His legs hurt, and sweat is dripping down his back. This is one aspect of fighting for ISIS that he absolutely hates. It’s 6 a.m. and the hot desert sun has already pushed the temperature over 100°F. Only six more hours and he’ll be relieved from his guard post. Abu stares down absentmindedly at the throngs of people hurrying through the marketplace and tries to forget about what happened yesterday evening.

It started out just like any other night that he was off duty—an hour of “free time” was his every evening (provided he wasn’t fighting) to do with as he pleased. Sometimes he wrote letters to his parents in Denmark telling of various battlefield exploits or complaining about his living conditions. Other times he would get on Twitter and let his Muslim brothers know about his new life fighting for ISIS. This particular time, Abu happened to be in downtown Mosul (under ISIS control) and was searching vainly with his smartphone for a free Wi-Fi connection.

His phone vibrated and a message popped up: “Wi-Fi network available.” Yes! He quickly tapped connect and then . . . uh, wait. What’s the name of that network? Gospel Box? Normally he wouldn’t have connected to something like that, but with nothing else available, why not?

Abu never intended to see it, but when he opened up his browser and tried to access Twitter, he found the only page he could access was a website called Gospel Box. A Christian website right on his phone offering free book and video downloads! What the ^@#$*? Something bright colored on the screen caught his eye and he leaned over slightly to see it better. It was a picture of a man wearing a crown and riding a white horse. In big bold letters it said “Good and Evil.” He tapped the picture and his phone instantly started downloading a book . . . Abu knew exactly what he believed; it was just that his curiosity had gotten the better of him. He shook his head and muttered under his breath the Shahada1 “لا إله إلا الله محمد رسول الل”

“Come on, Abu, pull yourself together,” he thought to himself. How could that little book he downloaded to his smartphone possibly be true? He had grown up in a strict Muslim home and knew the teachings of Islam by heart. He shook his head in an attempt to clear the stray thoughts from his mind. His hand seemed to move almost involuntarily toward the smartphone he had in his vest pocket. What else did that book have to say?

Amid the incessant noise you hear whenever you ride a “chicken bus,”2 Nora Espinosa squeezes her rotund body down into an already overcrowded seat and lets out a sigh. With any luck, she’ll be home to her village in four hours; with bad roads or lots of stops it could be closer to eight. Nora pulls her most treasured possession out of her handbag—a Moto G smartphone—and turns it on. Out on the road there’s no cell coverage but she can still amuse herself playing games. Nora opens up “Subway Surfers” and starts playing . . . She’ll probably beat this game again for the fourth time, but who cares? Besides, what else is there to do? Seven seconds into her game she notices the Wi-Fi icon light up and her phone automatically connects to a free Wi-Fi network onboard the bus. “How is there Wi-Fi out here on this deserted road?” she wonders.

With a few quick taps Nora opens up her web browser and it is automatically redirected to a website she has never seen before, a website called Gospel Box. It looks like an evangelical website that offers free Bibles, books, and videos for download. Hmm. Now this is interesting—finally, relief from the boredom of her trip.

1. The Muslim creed, “There is no god but God; Muhammad is the messenger of God.”

2. A “chicken bus” is the street term for public transport buses. These are typically older U.S. school buses that have been sold at auctions and driven to Mexico for use.

Both the people you just read about connected with their cell phones to a little device called the Gospel Box. It streams Christian media to anyone who connects to it, and all without an Internet connection of any kind. In places where people don’t have access to the Internet, this little box can beam out the message of Jesus Christ 24/7. With over a 100-ft. radius, anyone with a device capable of connecting to Wi-Fi will be able to download free of charge materials like Good and Evil and the KJV Holy Scriptures. It can also stream multimedia content such as dramatized audio Bibles, the Are You a Good Person? video and tract, the Jesus film, and any gospel presentation we choose to load.

Over a year ago, NGJ began sponsoring an idea called iMissionaries. We train people how to evangelize online and reach foreign-language groups with the gospel. With iMissionaries we can reach people who are already connected to the Internet, but what about those people who don’t have the Internet available? There are many places around the world where smartphones and other Wi-Fi–enabled devices exist, but there is no Internet infrastructure to allow them to connect to the World Wide Web. With the Gospel Box we can target people who aren’t online.

We are currently field-testing the Gospel Box. A Chinese language version has been completed, and we sent seven of them with a young evangelist over to China where he will be placing them in strategic locations throughout Beijing. We have great hopes for his success. Compilation is almost finished for the English language version, and we have plans to field test these in major cities around the U.S. It takes an enormous amount of time to build the first Gospel Box in any language: gospel material has to be sorted through and compiled, a website has to be built (on the device), and then the box itself must be reflashed, programmed, and debugged. After the first one is completed, copies can be made quickly and efficiently.

Other people have had ideas similar to this; however, no one has ever done this cheaply and on a mass scale. Our intentions are to create Gospel Boxes in every language in which Good and Evil is available (42 languages at present) and then distribute them where that language is read. We will be providing more info about this project on the iMissionaries website (http://iMissionaries.org). For the non-geek we hope to offer a ready-made edition for purchase. For the tech-savvy person we will provide complete DIY instructions on how to purchase the materials and build your own. Lord willing, in the next magazine we will give more in-depth info on this project, as well as real-world results from field-testing.

Your gifts to NGJ paid for the R&D on the Gospel Box, for the programming/completing of the Chinese version, and to have the boxes sent to China (helping the evangelist with travel costs). To further this project visit http://imissionaries.org/donate

Also, if you have technical gifts or access to someone who does, and you want to invest your time in something eternal, email me at [email protected]. I specifically need someone with expertise in using OpenWRT, and who is able to program with the C library (Linux).

My Favorite Way to Start Each Day

8 comments on “The Gospel Box”