Filter by:
NGJ Magazine / Articles / The Box
Do you get our FREE Magazine? 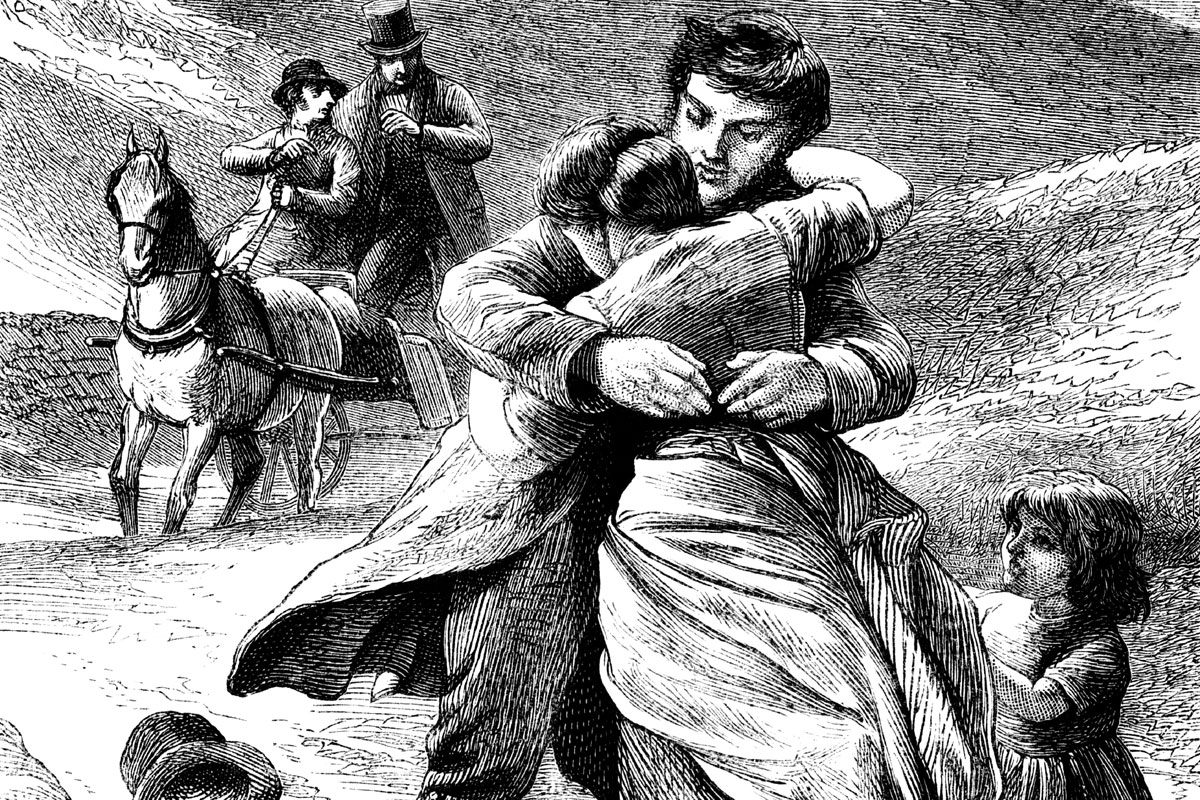 I remember a day one winter that stands out like a boulder in my life. The weather was unusually cold, our salary had not been regularly paid, and it did not meet our needs when it was. My husband was away much of the time, travelling from one district to another. Our boys were well, but my little Ruth was ailing, and at best none of us were decently clothed. I patched and re-patched, with spirits sinking to the lowest ebb. The water gave out in the well, and the wind blew through the cracks in the floor.

The people in the parish were kind and generous too; but the settlement was new, and each family was struggling for itself. Little by little, at the time I needed it most, my faith began to waver.

Early in life I was taught to take God at His word, and I thought my lesson was well learned, I had lived upon His promises in dark times, until I knew as David did, “who was my Fortress and Deliverer.” Now a daily prayer for forgiveness was all that I could offer.

My husband’s overcoat was hardly thick enough for October, and he was often obliged to ride miles to attend some meeting or funeral. Many times our breakfast was Indian cake, and a cup of tea without sugar. Christmas was coming; the children always expecting presents. I remember the ice was thick and smooth, and the boys were each craving a pair of skates. Ruth, in some unaccountable way, had taken a fancy that the dolls I had made were no longer suitable; she wanted a nice large one, and insisted on praying for it. I knew it seemed impossible, but oh! I wanted so very much to give the children the presents they each longed for. It seemed as if God had deserted us, but I did not tell my husband all this. He worked so earnestly and heartily. I supposed him to be as hopeful as ever. I kept the sitting room cheerful with an open fire and tried to serve our scanty meals as appealingly as I could.

The morning before Christmas, James was called in to see a sick man. I put up a piece of bread for his lunch – it was the best I could do – wrapped my plaid shawl around his neck, and then tried to whisper a promise as I often had, but the words died away upon my lips. I let him go without it.

That was a dark, hopeless day. I coaxed the children to bed early, for I could not bear their talk. When Ruth went to bed, I listened to her prayer. She asked for the last time most explicitly for her doll, and for the skates for her brothers.

Her bright face looked so lovely when she whispered to me. “You know I think they’ll be here early tomorrow morning, Mama.” I thought then that I would move heaven and earth to save her from the disappointment. I sat down alone that night and gave way to the most bitter tears.

Before long James returned, chilled and exhausted. He drew off his boots: the thin stockings slipped off with them and his feet were red with cold.

I wouldn’t treat a dog this way, let alone a faithful servant!” I said bitterly. Then as I glanced up and saw the hard lines in his face and the look of despair, it flashed across me – James had let go, too.

I brought him a cup of tea, feeling sick and dizzy at the very thought. He took my hand and we sat for an hour without a word. I wanted to die and meet God, and tell Him His promise wasn’t true; my soul was so full of rebellious despair.

There came a sound of bells, a quick stop, and a loud knock at the door. James sprang up to open it. There stood Deacon White.

“A box came by express just before dark,” he said. “I brought it round as soon as I could get away. Reckon it might be for Christmas. ‘At any rate,’ I said, ‘they shall have it tonight.’ Here is a turkey my wife asked me to fetch along, and these other things I believe belong to you.”

There was a basket of potatoes and a bag of flour. Talking all the time, he carried in a box, and then, with a hearty goodnight, he rode away.

Still without speaking, James found a chisel and opened the box. He drew out first a thick red blanket, and saw that beneath was full of clothing. It seemed at that moment as if Christ fastened on me a look of reproach. James sat down and covered his face with his hands. “I cannot touch them,” he exclaimed;

“I haven’t been true, just when God was trying me to see if I could hold out. Do you think I could not see how you were suffering? And I had no word of comfort to offer. I know now how to preach the awfulness of turning from God.”

“James.” I said, clinging to him, “don’t take it to heart like this; I am to blame, I ought to have helped you. We will ask Him together to forgive us.”

“Wait a moment, dear, I cannot talk now,” he said, then he went into another room. I knelt down, and my heart broke; in an instant all the darkness, all the stubbornness rolled away. Jesus came again and stood before me, but with the loving words: “Daughter!”

Sweet promises of tenderness and joy flooded my soul. I was so lost in praise and gratitude that I forgot everything else. I don’t know how long it was before James came back, but I knew he, too, had found peace.

“Now my dear wife,” he said, “let us thank God together.” He then poured out words of praise; Bible words, for nothing else could express our thanksgiving.

It was 11 o’clock, the fire was low, and there was the great box, and nothing touched but the warn blanket we had so desperately needed. We piled on some fresh logs, lighted two candles, and began to examine our treasures.

We drew out an overcoat; I made James try it on. It was just the right size and I danced around him, for all my lightheartedness had returned.

There was a warm suit of clothes also, and three pairs of woolen hose. There was a dress for me, and yards of flannel; a pair of arctic overshoes for each of us, and in mine was a slip of paper. I have it now, and mean to hand it down to my children. It was Jacob’s blessing to Asher, “Thy shoes shall be iron and brass, and as thy days, so shall thy strength be.” In the gloves, evidently for James, the same dear hand had written, “I, the Lord thy God, will hold thy right hand, saying unto thee, ‘Fear not, I will help thee.’”

It was a wonderful box, and packed with thoughtful care. There was a suit of clothes for each of the boys and a little red gown for Ruth. There were mittens, scarves, and hoods; and down in the center, a box. We opened it and there was a great wax doll. I burst into tears again; James wept with me for the joy. It was too much; and then we both exclaimed again, for next we drew out two pairs of skates. There were books for us to read; some of them I had wished to see; stories for the children to read; aprons and underclothing; yards of ribbons; a lovely photograph; needles buttons and thread; and an envelope containing a ten-dollar gold piece.

At last we cried over everything we took up. It was past midnight, and we were faint and exhausted with happiness. I made a cup of tea, cut a fresh loaf of bread and James boiled some eggs. We drew up the table before the fire – how we enjoyed our supper! And then we sat talking over our life and how sure a help God always proved to be.

You should have seen the children the next morning. The boys raised a shout at the sight of their skates. Ruth caught up her doll, and hugged it tightly without a word. Then she went into her room and knelt by her bed.

When she came back she whispered to me, “I knew it would be there, Mama, but I wanted to thank God just the same, you know.”

“Look here, wife,” cried James. We went to the window and there were the boys out of the house already, and skating on the ice with all their might.

Hard times have come again and again, but we have trusted in Him; dreading nothing so much as a doubt of His protecting care. Over and over again we have proved that, “They that seek the Lord shall not want any good thing.”

Breaking the Bondage of Shyness and Fear