Filter by:
NGJ Magazine / Articles / From Karen
Do you get our FREE Magazine? 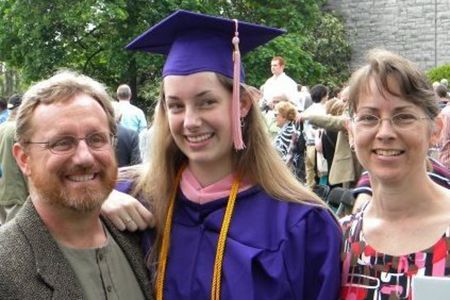 I want to answer the “how do you homeschool through high school” question from the perspective of a mom of five, four of whom chose to go to college.

First, there are some common misperceptions about sending your kids to college:

No one ever asked to see one of my children’s high school diplomas. No one ever asked if they “graduated.” The only college that ever asked about core requirements told me it didn’t really matter because they wanted my daughter in the orchestra program, so they would “waive” the requirement (meaning it wasn’t really a requirement). No one ever asked for an official signature on one of my children’s transcripts. Two children took the SAT, and only one college cared what the score was. None took the PSAT. Two others took the ACT, scored poorly because of various learning disabilities, and no one cared about the scores—they were admitted anyway. The two children who I thought might not be working at “college level” in math or English (again, due to various learning disabilities) took a placement test at the local community college and took one or two remedial classes before they were deemed up to par. All four were quite successful in their college careers and earned bachelor’s degrees in their fields of interest—political science, music education, art and photography, and exercise science.

I wanted my children to have a good foundation in math and English so they could follow whatever road it was they chose. I taught them math through algebra and geometry, because those have practical application in everyday life. I taught them English because I wanted them to have the ability to communicate at a high level. (And because I’m an editor and love English, if we’re being honest. 🙂

The remainder of their education was learning HOW to learn. We read about history from real, living, interesting books, not from dry textbooks whose leftist leanings wanted to make good comrades out of my kids. We learned geography with a huge world map under clear plastic on the dining room table. When we found an interesting country, we researched it at the library and on the Internet, ate their food, talked about their climate and why they were either a rich or poor country.

We learned science the kids were interested in. They once came home from an adventure across the corn fields in back of our house with a tray full of old, dry bones. They sat at the picnic table and assembled a complete skeleton, and then turned to a library book to determine, based on its size and the shape of its skull, that it was a red fox. We learned about earth science, biology, chemistry, and physics. Sometimes we referred to textbooks for information, but rarely followed them page by page. That would have forced the children to “learn” things that didn’t interest them, and what a waste of time! I could have made them memorize Newtons’ Second Law (Force = Mass x Acceleration), but put a splitting maul in their hands and they learn it firsthand and remember it for life! When the musician daughter went to college and took a physics class that taught her about sound waves, it was fascinating to her because it involved her passion—music. And isn’t that how we as adults learn? We find something interesting and pursue it. Why should it be different for our kids?

I kept records each year of basic topics covered so I could produce a transcript for each child that accurately reflected what they had “studied.” No one ever questioned what I had written.

One of the things that set my kids apart with admission committees was the application essay. One child wrote her entire essay about the whole family going “bridge jumping” off an old railroad bridge into the Buffalo River. Our flexible schedule allowed us to do that together, and how much more exciting than the tiresome list of extracurricular activities most applicants produce!

Colleges today are actively seeking homeschooled students, because statistically they get better grades and contribute more in every area to the college overall.

Preparation for higher learning does not have to be dull, dry, boring, rote memorization, living in fear the children won’t learn something they’re supposed to know. They will graduate from high school not knowing a LOT of things; so stop worrying that you’re going to miss something. Of course you are! As long as the children learn HOW TO LEARN and are people of character, they will be equipped to follow whatever path they choose.  🙂