Filter by:
NGJ Magazine / Articles / An Upset Mother Writes...
Do you get our FREE Magazine? 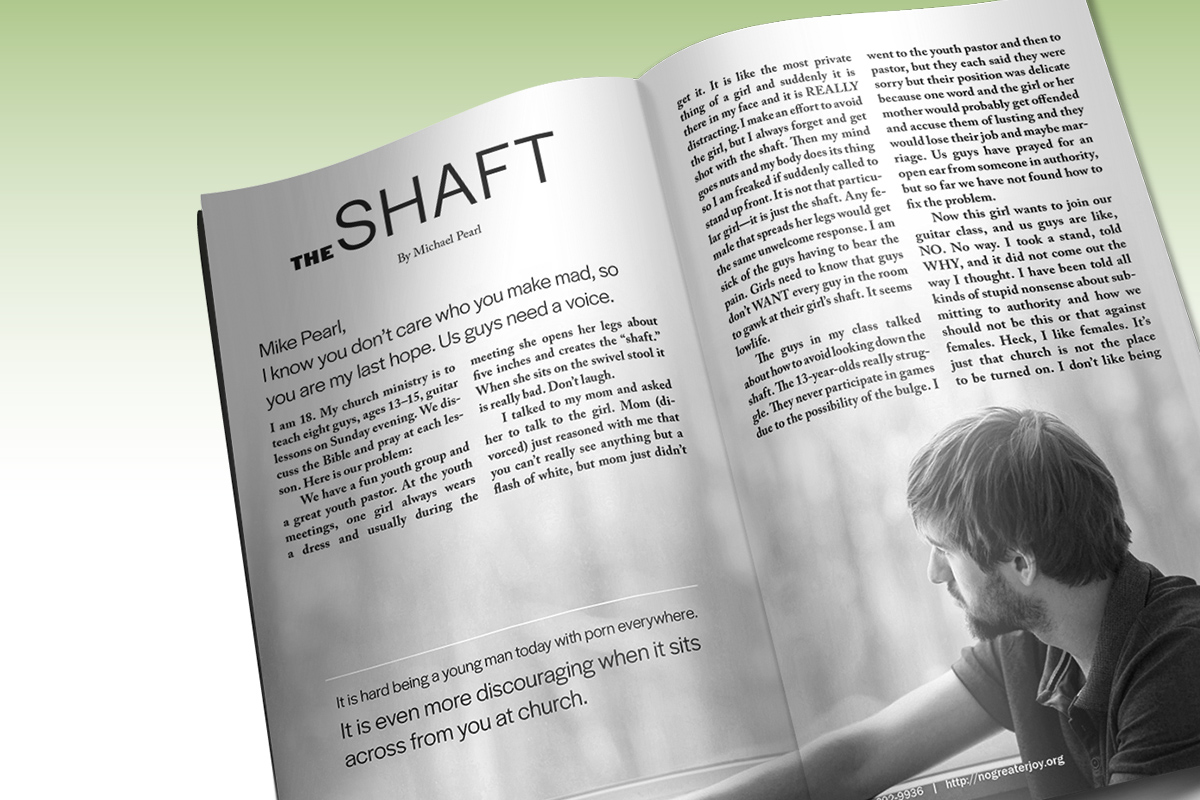 I appreciated the article in this most recent magazine "The Shaft". I know it is an issue that needs to be addressed, as immodesty is so rampant even in the church. I thought Mr. Pearl gave an excellent answer. I would caution though, the details of the struggle of the young man who wrote in the submission was a bit graphic. God says in Romans to be simple concerning evil. The article brought up thoughts and ideas that had not entered my mind previously and that now I have to get out. I certainly would not want my sons reading your magazine. I have unsubscribed from your magazine in order to preserve the purity of my children.

You will be removed from our mailing list as requested. But know, dear lady, you are not the only mother I have offended.

A woman walked up to me at a recent shindig and said something to the effect of “I just wanted to tell you that last year I was offended when you spoke about pornography and sex. I did not want my 11-year-old exposed to that kind of information. I didn’t want him to lose his innocence. We have raised him to be wise and disciplined and protected him from the opportunity to be exposed to trash. And I noticed that after you spoke he didn’t want to come hear you again. I knew he was offended. After we got home from the shindig I noted that he was quieter and more subdued. About two weeks later he came to me and confessed that he had been using pornography for some time and that was the reason he was upset. He came across it accidentally but secretly went back for more. I am so sorry. What can I do now?”

That was by no means the first time I had heard a story like that, and I know it will not be the last. In fact, it is becoming the trend for Christian families. We have lost this generation to perversion. The only question is “will we be able to save a few?” I know that I am a voice crying in the wilderness. Most of you reading this think that your kids are different. All boys, without exception, will find pornography fascinating and will go back for more. One exposure is like the first concussion: it causes damage. Each exposure after that just brings the child closer to being a castaway. Adults, whose worldviews and perspectives on relationships to the opposite sex are already formed, can have limited (not ongoing) exposure to pornography and not be greatly harmed; but a child, especially before the age of about 17 or 18, who sees porn is permanently imprinted with a total perversion regarding the marital union. If he repents and walks a circumspect path, he can overcome, but he will always struggle to maintain a wholesome view of sex. I know. I have spoken with hundreds of adults and some children who have visually feasted at the devil’s table.

After their children are exposed I am asked, “What can I do now?” Never trust your son again. You should not have trusted him in the first place. The frontal cerebral cortex, the part of the brain that processes caution and decision making, is not fully developed until the age of 25. Children do not have the brains to be wise. The do not appreciate the consequences. When I was 13 years old, if I’d had the opportunity to view pornography I would have done so, and then gone back for more and more. And I was the most spiritually minded, good Christian boy I knew.

Be frank with your son. Admit to the allure of the forbidden. Explain his inability to make wise decisions. Warn him with examples from popular culture and from acquaintances of the ruin it will bring. Tell him that you know the power of the temptation he will face, and acknowledge to him that you cannot put a fence around him high enough to prevent him from accessing pornography. If he is determined to get it, he will find a way.

Having taken these things out of his life, replace them with more fellowship, hard work, and creative hobbies like sports, mechanics, building, etc. Keep him busy.

When I said don’t trust him, I mean it fully, but do not communicate a constant air of distrust or suspicion. Do not slip around with a “what are you doing in there?” attitude. Live in joy, hope, and expectation that he will overcome and live a normal life.