Filter by:
NGJ Magazine / Articles / Gypsy Soup
Do you get our FREE Magazine? 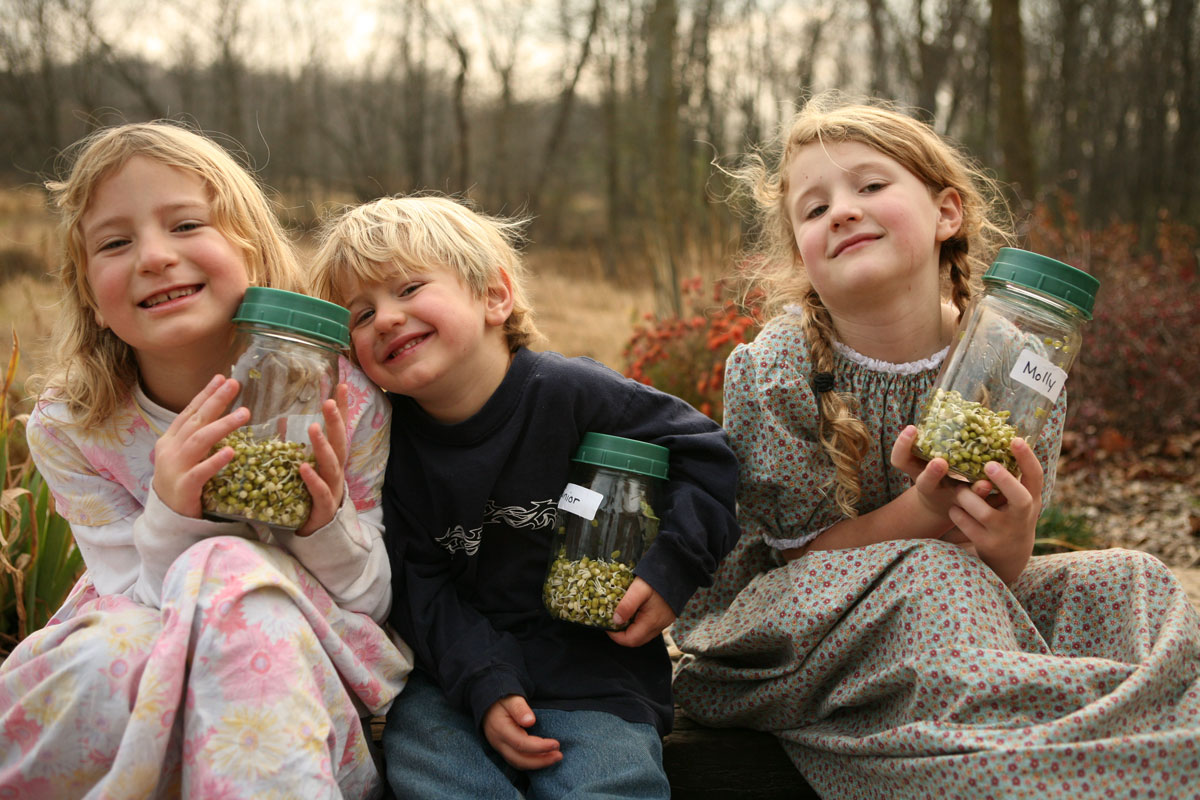 Once upon a time there was a small village where the people met every Sunday night around the courtyard fire-pit. All the ladies chatted about the latest birth or a certain young lady’s marriage prospects, each having dropped into the huge kettle of bubbling soup their offering of meat, vegetable, grain, or herb. The deep-throated laughter of the men telling the same old jokes mingled with the squeals coming from the playing children, all blending into a joyful clatter rolling down the valley. Generations came and went, each enjoying the glory of the setting sun, but most of all, the fragrant aroma of the cooking soup and the pleasure of time spent with good friends.

Then, one long, hot summer no rain fell in their region. Most of the corn dried before it eared; the hens seldom laid an egg; and no one had any extra vegetables to sell in order to buy the necessities. People looked concerned as they worried over how they would make it through the winter.

The first foreboding sign of awful things yet to come occurred one Sunday afternoon in early winter just as the first snow flakes began to fall. As the people gathered, making their contribution to the community soup, someone whispered that two of the ladies dropped nothing into the kettle, yet both families ate with relish, even coming back for seconds. The next week only a few women brought of their meager supply to drop into the huge kettle. The soup was watery and without flavor. Not even the salt and thyme bearer brought her portion. Yet, everyone ate heartily…everyone…even those who had brought nothing for the pot. The third week, the fire builder didn’t bring his wood, and the water drawer didn’t fill the kettle, and the last of the givers stayed home to peer from their windows at the odious takers. The people of the village spent the long cold winter hidden behind their doors, suspicious of their neighbors. It was a miserable hungry winter for all.

One chilly Spring Sunday afternoon, a child looked out the window and exclaimed, “Mama, old widow Martha is out building a fire under the courtyard kettle. What could she have to put into the pot?” The boy’s mother looked out in wonder. Soon, several children came out to the courtyard to watch. They felt compelled to help the skinny old lady draw water from the well and pour it into the huge kettle that sat over the now briskly-burning fire. By then, the whole village stood at their slightly open doors peeking out to see what she had to put into the pot. After all, she was the poorest of them all, having no children and being a widow these many years.

When the water began to boil, the old lady reached into the deep recesses of her big crocheted bag and felt around. The hungry children watched in wonder and excitement. She grinned as she pulled out a handful of bright yellow flowers. “See what I found just breaking through the soil on the south bank? Dandelion flowers. Aren’t they pretty? They are good for you, and taste so fine.” Again she reached into her bag, her face momentarily frowning, “Ouch! Stinging Nettles sting, but they taste good and are very nutritious. They come out early in the Spring, too. I’ll add them to the soup.”

The old lady removed her glasses and began wiping them clean on the hem of her thread-worn skirt. She hesitated only a few seconds, then replied with great enthusiasm, “Yes, both are weeds. I am making Gypsy Soup which is made of many unusual things, including weeds.”

“Why?” asked the group of children in one voice.

Martha carefully set her glasses back on her nose as she studied the waiting children. When she answered them, her old voice revealed a deep longing, and, yes, even hope. “Once, many years ago in the old country where I was born, there was a great famine. It was then that my dear mother taught me to make Gypsy Soup, and it was delicious. So I decided it was time to teach you.”

She felt a hard tug on her dress and looked down into the freckled face of a small red-headed child. The child whispered, “Was yer mam a real Gypsy?”

The old face wrinkled up into a thousand smiling lines. “No, she was only a simple woman like I am, but she learned how to make the weed soup from a real Gypsy.”

A mocking voice of one of the older boys called out, “Weeds don’t sound delicious to me.”

Martha studied the rebellious-looking teen for a moment, recalling that it was this boy’s parents who were the first to withdraw their portion in the winter. The old woman knew his family had more than most. She asked, “Oh, it would sure taste better with a few corn cobs in it, but I doubt you would have any corn cobs to spare.” The boy’s face now showed total mockery, “We ain’t sharing our corn, but we have cobs lying around everywhere. I would like to see you eat one; you ain’t even got no teeth.” The boy ran to the barn to get the cobs.

The old lady beamed with great pleasure, then looked down at the skinny little girl who pressed closest to her, “Child, I know your mother keeps a few hens. Is there any possibility she has any egg shells that might go into the pot?” The little girl giggled at the old women’s strange request, then turned and ran home to return with a basketful of egg shells.

The corn cobs and egg shells were gently stirred into the Weed soup. “I got a bone my daddy gave me for my dog,” whispered a little boy as he held the bone up for the old lady to consider.

Old Martha’s eyes glistened, “Good, that’s very good. Could you break it into pieces with that big rock?” The boy did as he was asked, then held the pieces in his hand looking at her for direction. She nodded for him to add the pieces to the pot. The water simmered through the afternoon and until setting of sun, giving off a delicious aroma. What looked like cooking garbage to the kids, the old lady knew to be a vitamin and mineral-packed broth.

When another child came with a handful of wild onions, garlic, plantain leaves, and wild carrot tops, the old lady carefully strained the cobs and egg shells out of the broth and set them aside before adding her newest addition to the kettle. “Oh, those onions will really taste good. Thank you, child.” Another child scampered off, returning with one old turnip and a few other withered leaves from a cabbage. Yet another child brought a handful of potato peelings. The village idiot joined the group, bringing a handful of dried alfalfa gleaned from hay that the milk cows were fed. The children’s faces registered alarm at the sight of hay being stirred into the kettle, but old Martha smiled with thanksgiving at the poor man. Alfalfa’s nutritional value would add much to the broth. Wisdom, like nutrition, was found in the most unexpected places. Lastly, a child came forth with several sprigs of dried thyme and rosemary gleamed from her mother’s weathered winter garden.

Martha’s soup was now almost complete. Smiling contentedly, she reached into her pocket and pulled out a small chip of animal salt/mineral block and dropped it into the pot of soup. Then the old lady bent down to add the last small stick to the dying fire.

Hidden behind a half-shut door, a man grimaced as he saw the old lady’s look of concern at the lack of more wood for her fire. Earlier in the day in the forest, he had stood as still as death behind a tree, hoping she would not see him and thereby obliging him to help her drag the heavy tree limb back to the village. Now he saw the firelight dancing on the laughing faces of his own children. How long had it been since he had seen joy in their countenance? Behind other doors, the same shame grabbed at the hearts of the guilty.

The old widow knew nothing of their self-reproach, only of the joy she felt in her heart as she warmed herself by the dying fire while listening to the broth bubble and pop. Like the days of old, the sound of children’s squeals rang out through the deepening shadows of the night. She sighed deeply. Almost…almost it was like it was before…before the drought, before fear and selfishness had stolen the joy and camaraderie of the people. Nothing had changed. Her cupboards, like almost everyone else’s, were still bare. All she had to offer was a fire, some water and some weeds. But it was enough.

Just as the first star’s light began to shine on the village, old Martha’s long spoon dipped deeply into the pot, releasing the unmistakable aroma of a delicious soup. The youngsters suddenly stopped their play to sniff the air. Moans of sheer pleasure could be heard as they gathered around waiting.

Her old voice called out the invitation, “Who would like a bowl of Gypsy Soup?”