Filter by:
NGJ Magazine / Articles / I Hate That Prophet!
Do you get our FREE Magazine?

I Hate That Prophet! 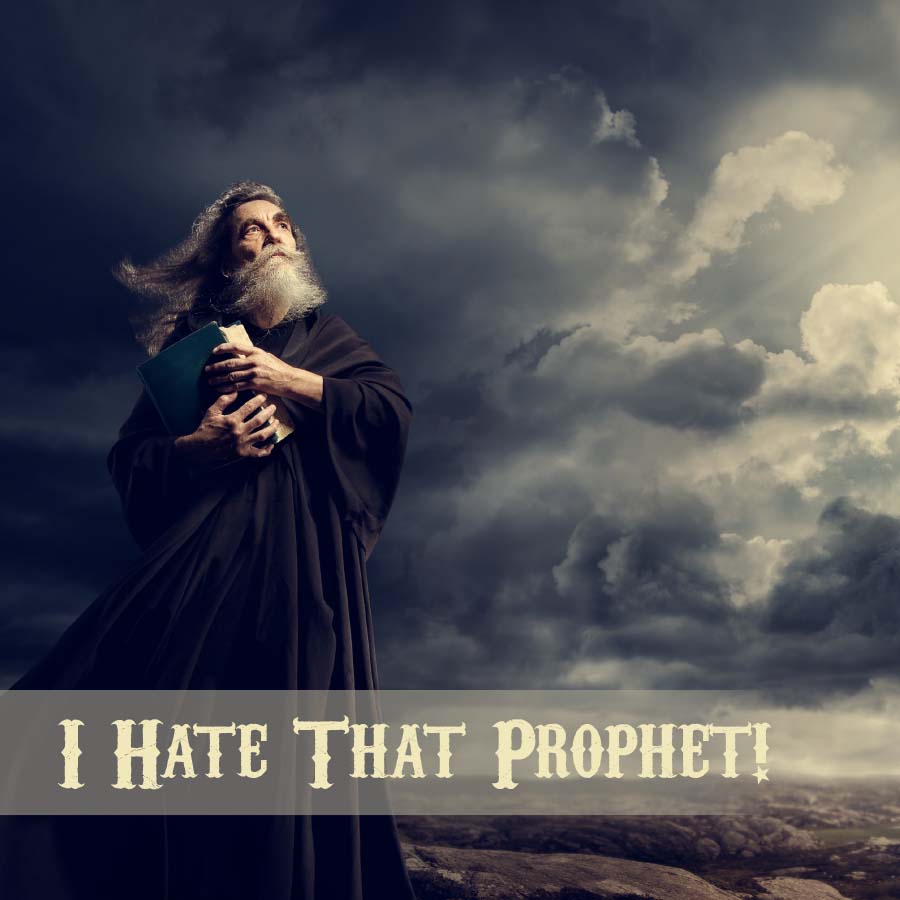 Did you know that most of the Bible is prophecy? A prophecy foretells the future. A prophet is someone who hears from God as to the future. The prediction could be in the lifetime of the hearers or thousands of years in the future. There are over 250 prophecies of the coming of Jesus Christ found in the Old Testament. There were a few prophecies of Christ’s lineage and birth and his ministry, but most are about his being rejected, crucified, and raised from the dead. Many are about his coming triumph and reign. With all those clear prophecies describing the life and death of Christ you would think that the Jewish scholars would have recognized Jesus was the one they prayed would come. But no one seems to take prophecies as reality.

In the Old Testament, 17 books are basically all prophecy. Books like Daniel are about what is happening in Daniel’s life and times, but much of Daniel’s life is about his prophecies of end times. Daniel started getting words from God as a teenager, and most of his early prophecies were about his own life and the life of his masters. For those who are interested in end times, the book of Daniel works hand in hand with the book of Revelation. Ezekiel has some interesting things to say about UFOs and other alien life. Jeremiah does too.

What is interesting to me is that no prophet is appreciated in his time. When he predicts something bad is going to happen, no one believes him, and when it does happen, well, then it is his fault for predicting it. It is crazy how people think the prophet was somehow responsible by just telling what was going to happen. Prophets almost never have anything glorious or wonderful to prophecy. It sure would be a better job if they could tell people, “Hey, if you stop looking at porn then God will bless you with a great paying job that you really love and your wife will love you.” Or you could tell a nation, “If you vote for this guy he will turn the whole country into a clean, safe, happy place.” But it doesn’t work that way.

Basically, being a prophet is not a job of honor or fame. All through the ages prophets have had a very hard time: killed, thrown in sewage pits, starved, had nervous breakdowns, had to preach to people who murdered their own family, had their loving wife killed and not allowed to show any sorrow, and so many other horrible things you can’t even imagine.

The prophets on YouTube are quite different from the biblical prophets. Sometimes I laugh when I watch them. I think they must watch each other so they can all predict what most news commentators are already predicting. I do see the real deal on occasion, but rarely. Mike says, the words they “received from God” indicate God watches the news.

Here is an interesting story of a prophet named Micaiah, found in 2 Chronicles 18. The two kings of Israel (north and south were divided) made an alliance to go to war together against Syria. One king was Ahab. You might remember that his beloved nasty wife was Jezebel. We all know about her. If you remember, the dogs ate her after she was pushed out of a window by her own servants—as was prophesied. But that’s another story for later.

King Ahab obviously feared God because he told King Jehoshaphat they needed to ask for a word from the LORD as to whether they would win if they did go to war with King Ramothgilead. They gathered together 400 prophets, and all 400 agreed that they would win a glorious victory. Hmm, do you think they might have been watching the same news channel? Keep in mind these guys are known prophets. King Jehoshaphat had enough sense to question whether they were really hearing from God. He asked King Ahab if there were any other prophets available. This is King Ahab’s answer: “There is yet one man, by whom we may enquire of the LORD: but I hate him; for he never prophesied good unto me, but always evil . . ” This prophet must be the real deal since he is properly hated. Someone was sent to find the hated prophet, but while they waited, the other 400 prophets were eager to share their divine word.

The two kings sat in a special room listening as the 400 prophets came before them sharing their positive words. One prophet had made a fancy piece of art—horns of iron. He displayed his horns and said, “With these horns thou shalt push Syria until they be consumed.” Quite a display of confidence. The other prophets agreed saying, “Go up to Ramothgilead and prosper: for the LORD shall deliver it into the hand of the king.” A true “word of faith” minister.

The messenger finally located the prophet Micaiah and forewarned him that since all the other prophets agreed the kings would win, he should do likewise. A little political peer pressure always helps. This guy was not up for sale though; you can tell by his response: “As the LORD liveth, even what my God saith, that will I speak.” Micaiah was not only a prophet, he also had a sense of humor, so when he was brought up before the kings he said, no doubt in the tone and manner of the 400 parrot prophets, “Go ye up, and prosper, and they shall be delivered into your hand.” His mockery was well noted by King Ahab. The king shouted, “How many times shall I adjure thee that thou say nothing but the truth to me in the name of LORD?” Prophet Micaiah was known for this type of mockery. I assume Ahab was disgusted with the whole scene and wanted the prophet’s true opinion.

Prophet Micaiah soberly answered Ahab, “I did see all Israel scattered upon the mountains, as sheep that have no shepherd: and the LORD said, These have no master; let them return therefore every man to his house in peace.”

In keeping with the way REAL prophecies are received, King Ahab said to King Jehoshaphat, “Did I not tell thee that he would not prophesy good unto me, but evil?”

The true prophet was not finished. He wanted them to know about what happened in heaven to cause 400 prophets to lie. “Therefore hear the word of the LORD; I saw the LORD sitting upon his throne, and all the host of heaven standing on his right hand and on his left. And the LORD said, Who shall entice Ahab king of Israel, that he may go up and fall at Ramothgilead? And one spake saying after this manner, and another saying after that manner. Then came out a spirit, and stood before the LORD, and said, I will entice him. And the LORD said unto him, Wherewith? And he said, I will go out, and be a lying spirit in the mouth of all his prophets. And the LORD said, Thou shalt entice him, and thou shalt also prevail: go out, and do even so. Now therefore, behold, the LORD hath put a lying spirit in the mouth of these thy prophets, and the LORD hath spoken evil against thee.”

Every once in a while in the Bible God allows his prophet a glimpse of what goes on in heaven. This particular scene is revealing. God asked for someone to come up with a plan that would totally convince both kings to go to battle. God still had his rightful prophet, but he needed all the king’s prophets to be deceived. A couple other heavenly beings of God came up with ideas, but they were vetoed. Then another of God’s soldiers that was stationed in heaven came up with the best idea. He said, “I will be a lying spirit.” Nothing like a lying spirit to bring confusion. Much goes on in God’s war room that we know nothing about. You wonder why our leaders seem to be so ridiculously dumb . . . maybe God has sent a bunch of lying spirits to them. Back to our story.

You can read it for yourself. It ends as expected. And as predicted the real prophet was thrown in prison and fed really bad food. If he had lived in these modern times people would say that God would take care of his real prophets and not let such deception occur. Maybe people today should rethink what they think about God.

The two kings did go into battle. King Ahab had enough fear of what the prophet of God had said that he disguised himself to look like an ordinary soldier so the enemy wouldn’t single him out. But when God speaks, a disguise doesn’t help. Verse 33 of chapter 18 in 2 Chronicles says, “And a certain man drew a bow at a venture [shooting at nothing in particular], and smote the king of Israel between the joints of the harness . . .” It was the first divinely guided missile, finding its way into the narrow crack where the armor was joined together. No getting away from God. There was total defeat just as the prophet said.

God’s prophet did get set free and prophesied again, negative stuff as usual. Par for a prophet’s course, then and now.

Conversation In A "Bible" Bookstore