Filter by:
NGJ Magazine / Articles / Prisoners Freed
Do you get our FREE Magazine? 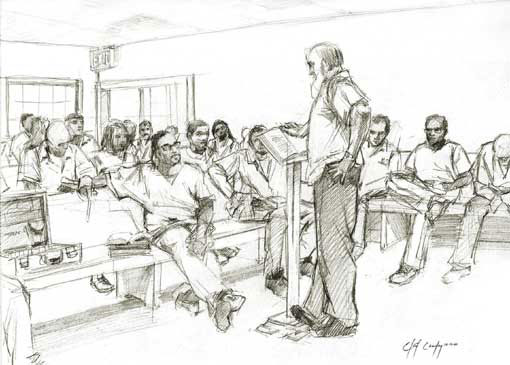 You may have heard me mention that my favorite ministry is to preach the gospel of Jesus Christ to the inmates at a nearby state prison. There is nothing to compare to it.
I started preaching in prisons and jails 40 years ago, when I was 18 years old. It gets old trying to convince nice homeschoolers that they are sinners and need to repent toward God if they are to receive his blessings, but most guys in prison know that they are helpless sinners. About 60 to 80 men come to the chapel every Saturday morning for 90 minutes to hear me teach the Word of God—no holds barred, no punches pulled. It would shock you to hear me speak to them. I think that I owe much of my frankness to having worked in this kind of ministry all of my life. An inmate walks up to me and asks, “Will you write a letter to the parole board and recommend that I be released?” I answer, “I don’t know if you need to be released or not. As long as you’re in here, I can preach to you; but if you got out, I might have to shoot you, so I’ll just leave it to God and the authorities to decide.” They laugh and slap me on the back, understanding full well that I care about them, but that what I say may be true, in some cases.

Some of them are murderers, rapists, bank robbers, drug dealers, wife killers, child molesters, and all of the crimes you read about. But I only know them as brothers in Christ, saints of God, new creatures in Christ Jesus. I tell them not to tell me what they did to get in the slammer. When shut up in a room, surrounded by 60 convicts, with no guards and no electronic monitoring, I don’t feel any more threatened or intimidated than I do at a homeschool fair. The men who are saved are as gentle and as just as the apostles of Christ. There are a few of them that I would rank with the greatest men of God I have ever known. Some are students of the word of God, excelling seminary graduates.

Almost every week, one of them is released into the free world, and every week there are new guys coming into the bible study for the first time, looking around apprehensively, having decided to “give God a try”. Every week is a challenge. There are guys hearing the gospel for the first time, and there are guys with extraordinary minds and spirits, who are instantly ready to give me the chapter and verse reference that I cannot remember. All I need to do is recall a word or two, and someone knows the location of the verse.

Skeptics speak of “jail house religion”. There is such a thing, but it is no different from “church house religion”, and probably has a better average of permanence. The Church at Cane Creek is composed of about fifteen men, four or five of whom are ex-convicts. Several of the men who have gotten out of prison are now going back into prisons to minister the gospel. Some of the men who were released are now pastors of churches; others are successful, honest, businessmen. One man who has done 23 years, nine of them sitting under my ministry, will be released next month. His children are grown, but his wife has waited on him all this time. They will be reunited, and he will start a new life to match his new soul. I have no doubt that he will be the same man of God out in the free world that he has been in the pen.

Some of the men to whom I have ministered have been killed by other inmates. Others have died of disease or old age. Some have been transferred to other facilities where they carry on, teaching the same gospel that I taught them. One inmate, a big black man of very high intelligence, was transferred to a maximum security facility. Like Daniel, he has so won the confidence of the staff, that they have permitted him to teach a Bible class every day. I recently received a letter from him telling me that, so far, 7 of the guards and the warden have been saved, along with many fellow inmates. For the many years that he was under my teaching, he studied the Bible all the way through every year—not just read….studied….with helps and aids. He was learning Greek when he transferred to the maximum facility. It helped him defend the King James Bible against unlearned preachers coming into the institution, trying to steal the inmates’ faith in the inspired words of God.

Every week I take into the prison all of the Bibles and Bible-help materials that I can carry—about $300.00 worth each time. I need your help. The Bibles I give out are purchased at Sam’s Club for about $11.00 each. They are large-print, very readable, with flexible vinyl covers. But I cannot keep up with the demand. I am not asking for you money. Send me your quality King James Bibles. I refuse to distribute cheap Bibles. Send me that $89.00 K. J. V. that is slightly worn, with a few marks in it, maybe one or two torn pages, but still has a lot of wear left. These guys would be proud to own a quality, used Bible. Don’t bother to send an N. I. V. or a New King James; these guys are too knowledgeable to buy into a substitute. And before you write a condescending letter about “better translations,” understand that I first started studying Greek 40 years ago. I use 3 or 4 different Greek Bibles regularly, and I don’t necessarily believe any of them. If you have been deceived and want to know more about the Bible issue, order the book we sell: Which Version is the Bible? It will get you started. Now, back to the prison ministry.

In addition to King James Bibles, every one of my students would love to have a Strong’s Exhaustive Concordance of the Bible. I buy them in lots of 10 for about $12.00 each. In addition, the guys would love to have a good conservative Bible dictionary. Many of them will read it from cover to cover. Some of you have three our four Bible dictionaries that you haven’t opened in a year. Give it to someone who will read it all the way through in the next year. A Nave’s Topical Bible would be nice. If you have an old Larkin’s Dispensational Truth lying around, I will let them draw lots to see who gets that prize.

If you put your name and address in the book you donate, the recipient will write to you, but it may be someone who tries to con you out of some money, so think twice before you commence correspondence with a prisoner whom you don’t know. Many of the guys who receive Bibles and books will not be saved. But, if you think you are up to it…well…go for it!

You could start a drive to collect Bibles and concordances, and then send them all together. It will save on shipping cost and provide us with a bigger harvest.

I told the guys that I was going to lay this request before you. They are excited about the possibility of owning a good, used, leather-bound Bible and a Strong’s Concordance. They await your response.

If you know of a prisoner who is in an institution that will permit them to own cassettes tapes or CDs, I will send to them my Bible teaching tapes free of charge. We do it all the time. Before you send us their address, make sure they are permitted to receive tapes, for many prisons do not allow them. Help us help them.
Michael Pearl