Filter by:
NGJ Magazine / Articles / How to Instill the Joy of Giving in our Children
Do you get our FREE Magazine?

How to Instill the Joy of Giving in our Children 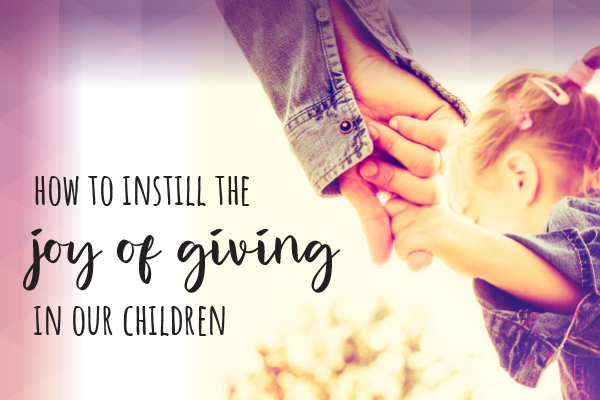 When our oldest was seven and our youngest was four, I started a new tradition for our family Christmas—a tradition of giving. It can be difficult for youngsters to realize that Christmas is about more than getting gifts. Their little brains are assaulted for weeks beforehand with advertising that appeals to their senses for all sorts of indulgence. The idea of instant gratification and delights to appease desires are designed to convince their little minds of what they must have to be happy. All this isn’t helped by a general lack of involvement in the process of preparing, planning, buying, and wrapping gifts to give to others. Of course, when they are so young they don’t have much to give... or do they?
As we entered the Christmas season that year, I became aware of a new level of expectation the children exhibited regarding gifts––that is, their focus on receiving them. I wanted to shift this focus from self and receiving to others and giving in order to experience true joy in the season. They were too young to understand much about money or have an appreciation for cost. However, they were not too young to understand shopping and being the one to hand over real money to the sales clerk like a grownup.
Over lunch one day, I explained that we were going to go Christmas shopping, and that I was going to give them money to buy a gift for each sibling and parent. They could browse the store and buy anything they wanted for each person. They were to keep it a secret and not ask or tell each other what they had bought. They would be given wrapping paper and supplies to wrap and label their gifts after we got back home. This announcement was met with lots of smiles, giggles, and excited chatter.
I planned an afternoon at our local dollar store, blocking out plenty of time to make it a memorable outing for the children and to not be rushed or hasty, giving them the opportunity to carefully choose their gifts. I prepared exactly $1.07 (based on the tax rate) per gift per person for each child. As we got ready to leave, I gave them each their bag of cash. I explained how everything in the store would be a dollar, that the extra seven cents was for tax, and that they had exactly what they needed to buy everyone a gift, so to be sure not to drop any of the coins.

Children are not a distraction. They are the most important work.
~C.S. Lewis

My sister came along with us so that each child could pair up and be under the supervision of an adult. We offered guidance, tips, and advice as they roamed the store. I recommended looking over everything before choosing their gifts. It was a lot of fun, each of us meandering down the aisles, furtively keeping an eye out to avoid the other two pairs of shoppers. There was so much to look at and choose from! They shopped for everybody except the adult they were with. Then we swapped partners in order for them to buy for the other parent so we could keep everything a surprise––you can’t shop for Mom or Dad when they’re standing right there! Afterward, the kids had a ton of fun wrapping their gifts in an assortment of old boxes. What anticipation was felt that year as they waited impatiently for Christmas Day, excited for the moment when everyone would open “their” gifts they’d bought for them. Christmas Day held an extra joy and expectation, but this time with the right focus––the joy of giving to others. Those little one-dollar gifts were some of the most prized and talked about possessions that year. They had discovered the gift of giving.

This became a treasured family tradition that we hold to this day. Well, not the dollar store part, nor the part where Mom gives them the money to buy their gifts. In fact, it wasn’t more than a couple of years later when they wanted to save and use their own money to buy the gifts. The amount has differed through the years as they first earned money with extra chores, then paper route jobs, then teenage department store and nursing jobs, and then became college students. The latest adjustment (and improvement, in this mama’s opinion) has been to give as each is able and desires, not based on a dollar amount. This is the truest and most blessed expression of giving: from the heart.
My mission years ago was to instill an appreciation in my children for giving. My mama-heart overflowed each year as the most eagerly anticipated and fought over thing was who got to give out their gifts first. This heart toward giving rippled out into their everyday lives. They became more aware of others’ needs and were eager to bless from their own resources––time and talent, as well as money. Give your children the gift of giving. It never loses its value, breaks down, or rusts, nor can it be stolen. It is an investment that pays back throughout their life in heavenly dividends.