Filter by:
NGJ Magazine / Articles / The Fireman
Do you get our FREE Magazine? 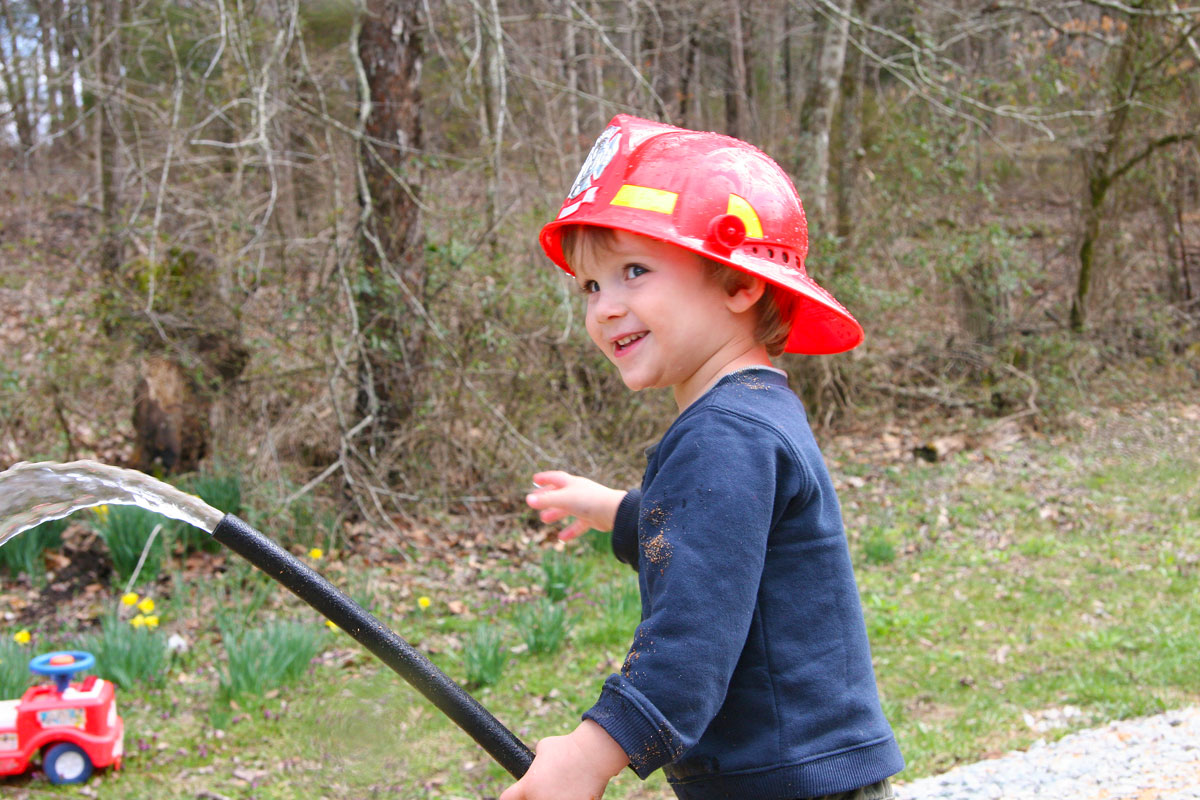 We’re city dwellers. For you country bumpkins, that basically means we live in a jail…sort of. There are plenty of stores, hospitals and lots of car exhaust, but not many fields to run through, or crawdads to catch.

When my son was three years old, I longed for him to have inspiring summer afternoons playing outside like I did when I was a child. One hot, sultry afternoon at nap time, I was reading to him his favorite little Red Fire Engine book when it suddenly dawned on me what I could do to give him a thrill. While he lay on his bed and watched, I solemnly took his yellow plastic raincoat and his tall rubber boots out of the closet, all the while informing him that he needed to take a good nap because when he woke up, there might be a fire for him to put out. He laid there wide-eyed, his little fireman’s hat resting ready on his tummy. The spine-tingling resonance of his voice convinced me that I had struck gold. “Wow, I would like that.”

While he slept, I took some big, square colored chalk out of the school drawer in order to create my masterpiece. On our walkway, I drew a big tree, then added daring slashes of red streaks which I hoped look like fire. Then I dragged the water hose over to the sidewalk, turning the spray nozzle on just a short half-turn, ready for my little fireman to pull the trigger.

When he awoke, I excitedly told him about the tree on the driveway as I helped him put on his boots and coat.  I kissed his cheek as I challenged him, “Go put the fire out, big man.”

He solemnly placed his plastic red hat on his head and rushed out with all the importance that a real fireman might feel in the act of a great rescue. For over an hour he sprayed the sidewalk tree until there was no sign there had ever been a chalk drawing. It was clear that his imagination had taken him to awe-inspiring heights. He was THE MAN, and I was his mama.

Every day that hot summer, he went to sleep dreaming of his impending important task. And while he slept, I left my housework and rushed out, chalk in hand, to prepare my son’s newest adventure.

Time rushes forward, making most of us miss many of the magic things in life. My son is almost a man now. As I look back to those precious days, I have never regretted having unfolded clothes or unwashed dishes on the afternoon of July 9th or August 10th or any other day of my life. Oh, but what if I had missed drawing that first burning tree?

Inspired by a story told by Mickey Wilhite, my wonderful friend, one
of my favorite nieces and a sister in the sweetest sense of the word.
~ Debi

2 comments on “The Fireman”